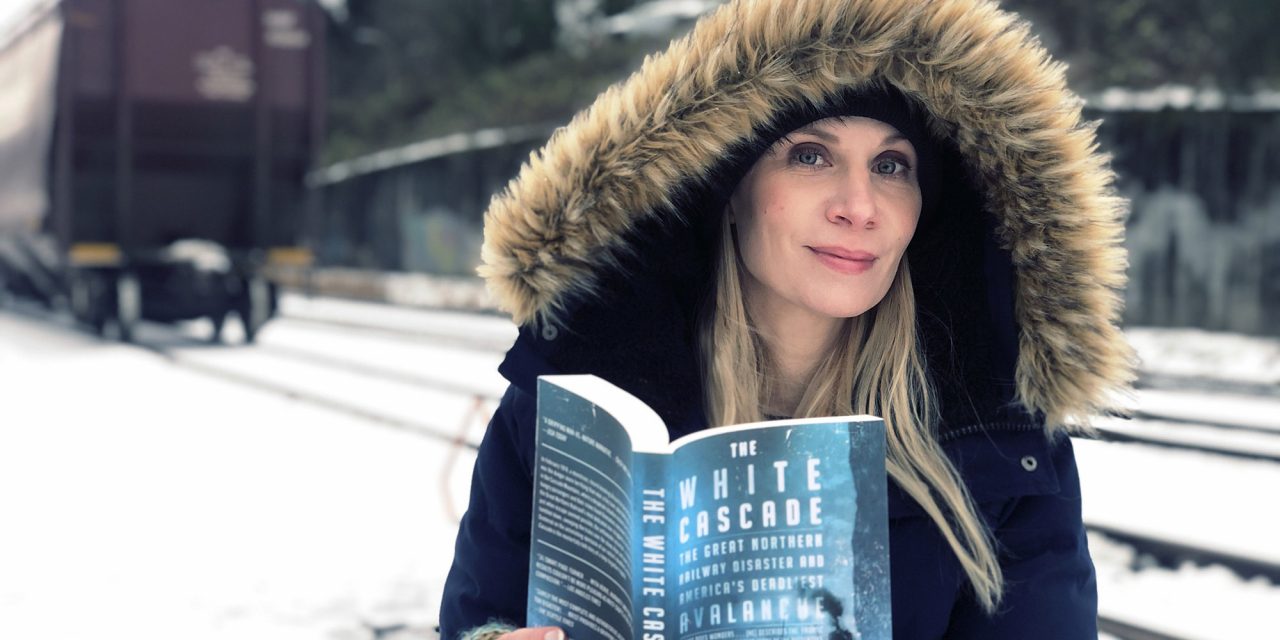 I’ve been reading some really great nonfiction books lately! At the top of the list is The White Cascade: The Great Northern Railway Disaster and America’s Deadliest Avalanche by Gary Krist, which I read during Washington’s snowy days in January. I absolutely love reading snowy books when there is a snowscape through my windows, so I tend to save the stormy and cold stories for this time of year.

The topic of The White Cascade is the Wellington avalanche of February 1910. That winter, a record-breaking blizzard stranded a passenger train and a mail train in Wellington in the Cascade Mountains, which is the mountain range that separates western Washington from eastern Washington (my home state!). Wellington was a railway community that was a tiny stopping point on the winding tracks that ran through the mountains. It was a place where many of the railway workers lived – some with spouses, most without – and there were a few businesses that serviced that population. The Wellington buildings and shacks sat at the base of a large mountain slope, and on the other sides of the tracks was a deep valley. In other words, with the increasing risk of avalanches that was being brought upon by the extreme weather, this wasn’t a good place to park a train.

For days, the Great Northern Railroad used the machinery and methods of those times to try to clear the tracks of snow and get the trains out of the mountains, but every time they seemed within reach of creating a clear exit, another avalanche would cover a portion of the tracks somewhere on the line. Early on, many of the female passengers pressed the railway staff to park the trains in the safety of the nearby concrete tunnel, but those requests fell on deaf ears. As time went on, the snow blockages made the tunnel option an impossibility, and all of the passengers grew increasingly worried of the avalanche risk and started to formulate a plan of escape. That plan came too late for most, as an avalanche did eventually break free from the slope above Wellington and hit the trains, sweeping them down the mountainside into the valley below. It was our nation’s deadliest avalanche. Some of the passengers and workers survived the avalanche, but many did not.

The picture I’ve painted might sound like this story is a clear-cut case of a negligent or evil railroad company, and I’m not denying that there aren’t some of those elements to the story, but it’s much more complex than that. The men who were in charge of running that portion of the rail line were working around the clock, desperately trying to free the trains and putting themselves in danger as they did so. That’s part of what makes this book so interesting is that there are plenty of decisions that you can disagree with or criticize (as I did), but there also aren’t many easy answers.

Author Gary Krist clearly did extensive research when writing this book, and even though this event took place over a century ago, Krist rarely resorts to conjecture or imagination, and when he does, he clearly points out that he’s simply speculating what a person’s thought process may have been given what we know about the circumstances. The book has extensive source notes, and at the beginning of it, Krist states that he only uses quotation marks when he’s lifting words directly from witness testimony, diaries, letters, telegrams, court transcripts, or other primary sources.

Krist describes the railroad men who were in charge in great detail, and he also describes many of the passengers – who they were, why they were traveling on the train, their actions while stranded, and what happened to them in the avalanche.

I bought this book because I’ve always found disaster stories to be both fascinating and educational, and this book certainly fits that bill. At times, it read like a thriller. As the book’s timeline moved closer to the avalanche, I was flying through the pages. The book is not just about the disaster and survival aspects of the avalanche though. A large portion of it is a historical account of the challenges of building a railroad in the Cascade Mountains, the nation’s history of railroading, labor relations, and the beginning of environmental and corporate oversight. This background is necessary to fully understand why the trains were stranded in the first place and why certain fateful decisions were made. Parts of the court testimony made for dry reading, but I also appreciated that the book had the level of detail that it did. It’s hard to form an opinion when you aren’t given enough information to do so, and Krist definitely provides a lot of detail.

The part of the book about the avalanche is very exciting but also quite sad and disturbing in places. But that’s to be expected of course: A bunch of people die in an avalanche! There are a few incredible individual survival stories with amazing details, but there are also some stories that are lacking in specifics. That’s understandable since this tragedy happened over one hundred years ago, and Krist can’t interview the survivors directly. He can only write about the information that has been preserved through the years. The book also includes maps and photos of the Wellington area before and after the avalanche, photos of the wreckage, and photos of many of the people who are profiled in the book.

Sometimes natural disasters are as the name implies: they’re natural and they’re random and getting caught in one is simply bad luck. But so often, these things happen when the planet’s natural patterns intersect with human’s actions and choices. That is the case of the Wellington avalanche. With those types of disasters, there’s much to be debated, much to be learned, and many things to fix. Those are the stories that I find most compelling, and The White Cascade is exactly that. It’s a well-researched, riveting, thought-provoking story.  If you enjoy reading about the history of American enterprise, natural disasters, and the human will to survive, I recommend that you add this book to your reading list.