Writers on Writing – Famous Quotes – Good or Not? 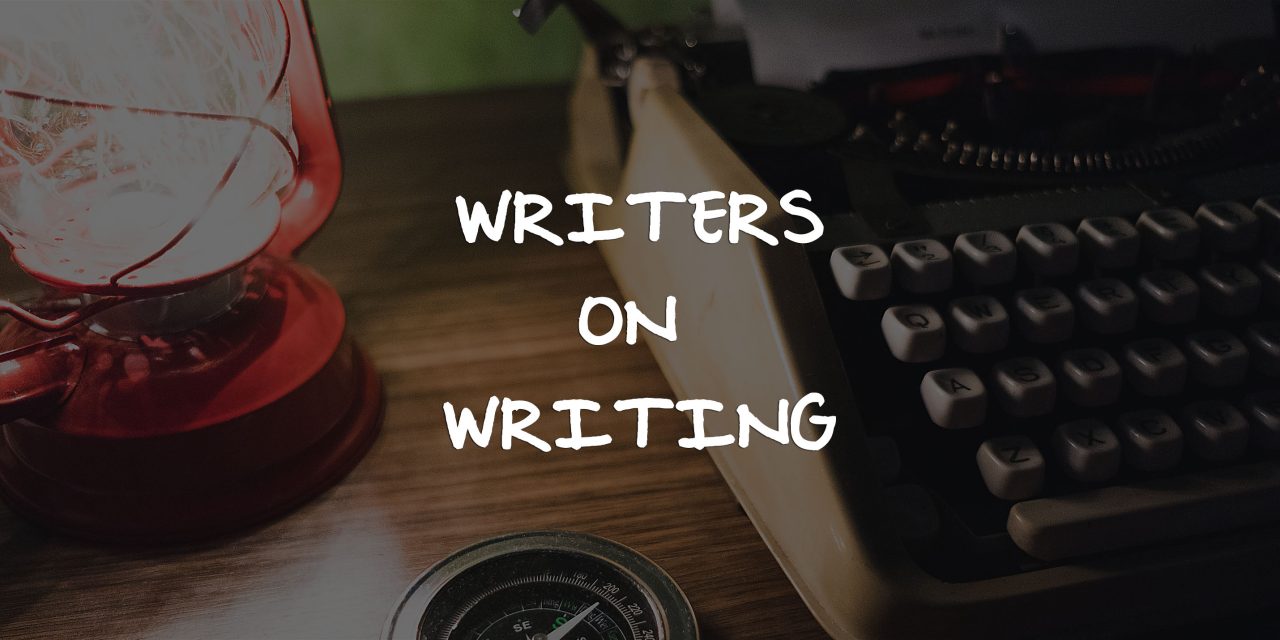 Writers and our obsession with words! We love words so much that we even love to quote famous writers talking about the craft of writing. It gives us inspiration and comfort to draw on the ideas, notions, and encouragement of those that came before us or that we look up to now.

In the spirit of that, I thought it’d be fun to examine some quotes on writing from well-known writers and tell you whether I agree, disagree, or have mixed feelings about them. 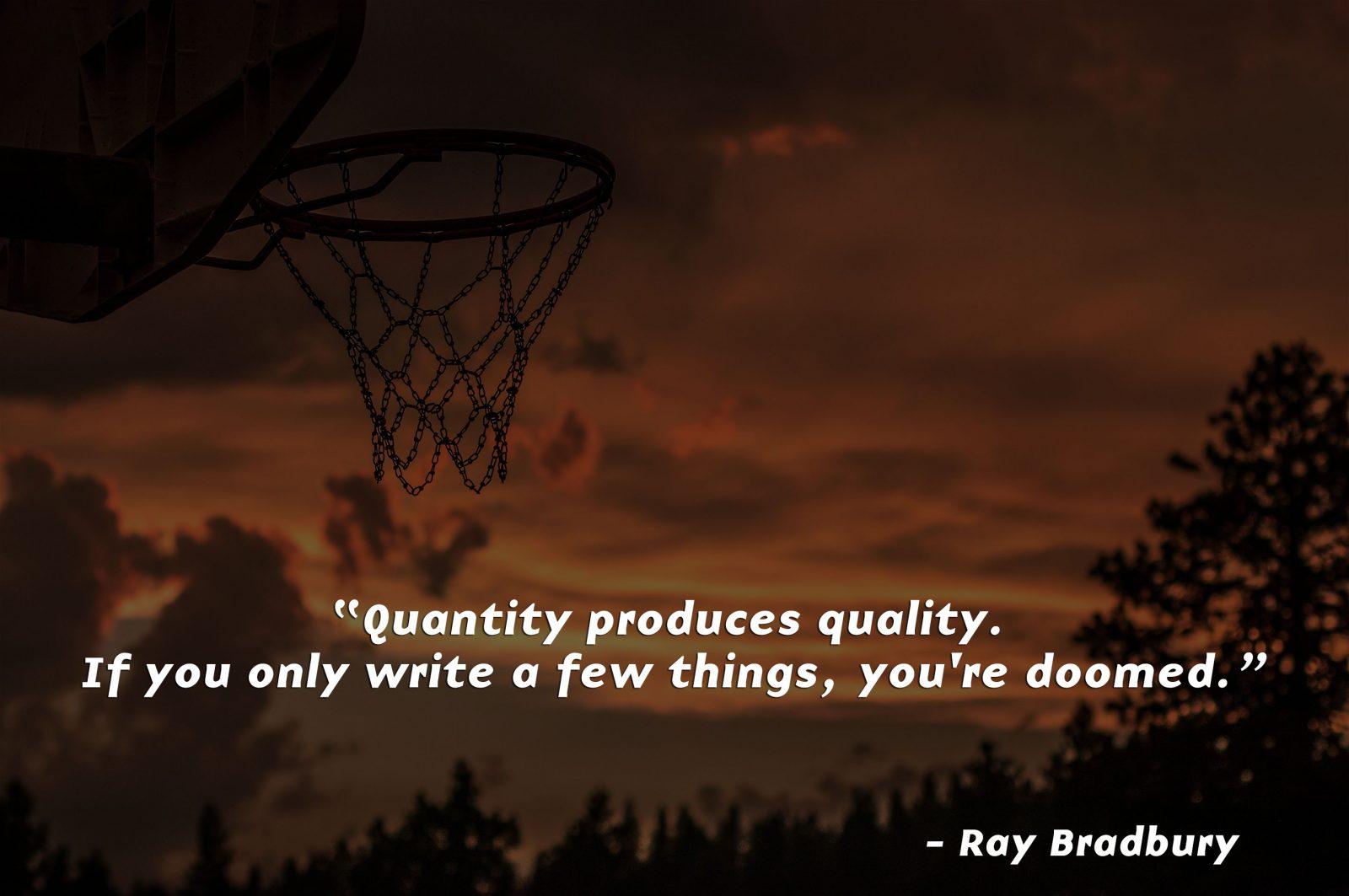 AGREE. Just like sports! Even if you are naturally gifted, there is no substitute for practice. You don’t get good at making free throws by never practicing them. (Note to ballers: They’re called “free throws” for a reason. They’re FREE. So practice them, please).

So writers, you should write. And then write some more! That way, when an agent reads the first page of your screenplay or a publisher reads the opening lines of your novel, you sink two points, all net. (Sorry, I’m going overboard with the basketball metaphor). 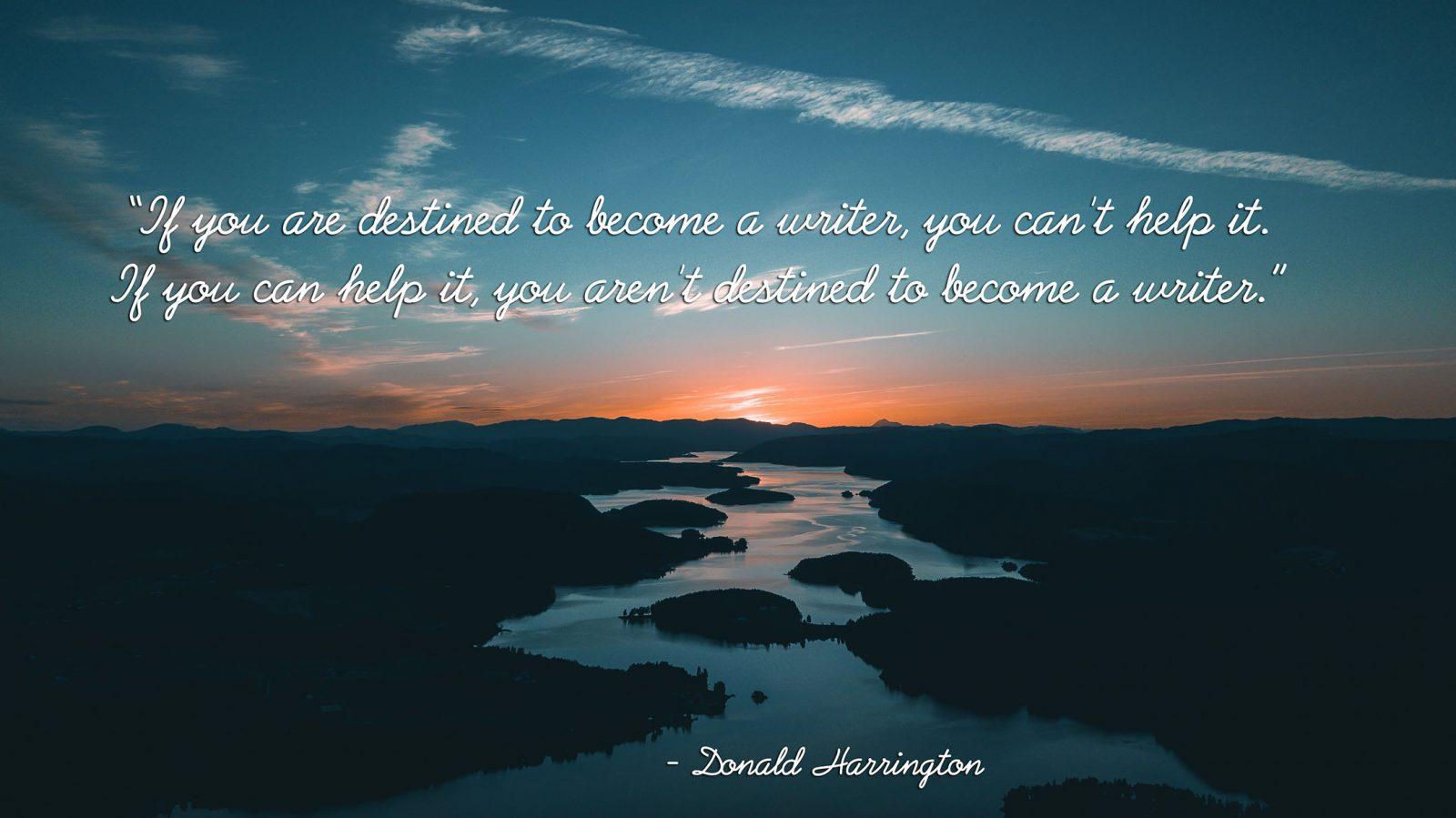 AGREE. Writing is difficult at times. Sometimes the craft itself is frustrating, and sometimes it’s the circumstances in your life that make it challenging logistically or financially. But you do it anyway, because you have a dream, you have a discipline, and you just have to do it. And if you don’t have to do it, then I agree with Harrington, do something else. Because that something else will likely give you more stability in life and lots more free time.

But if writing is what you really want to do, in the end, it will be the thing that brings you the closest to your true, authentic self. 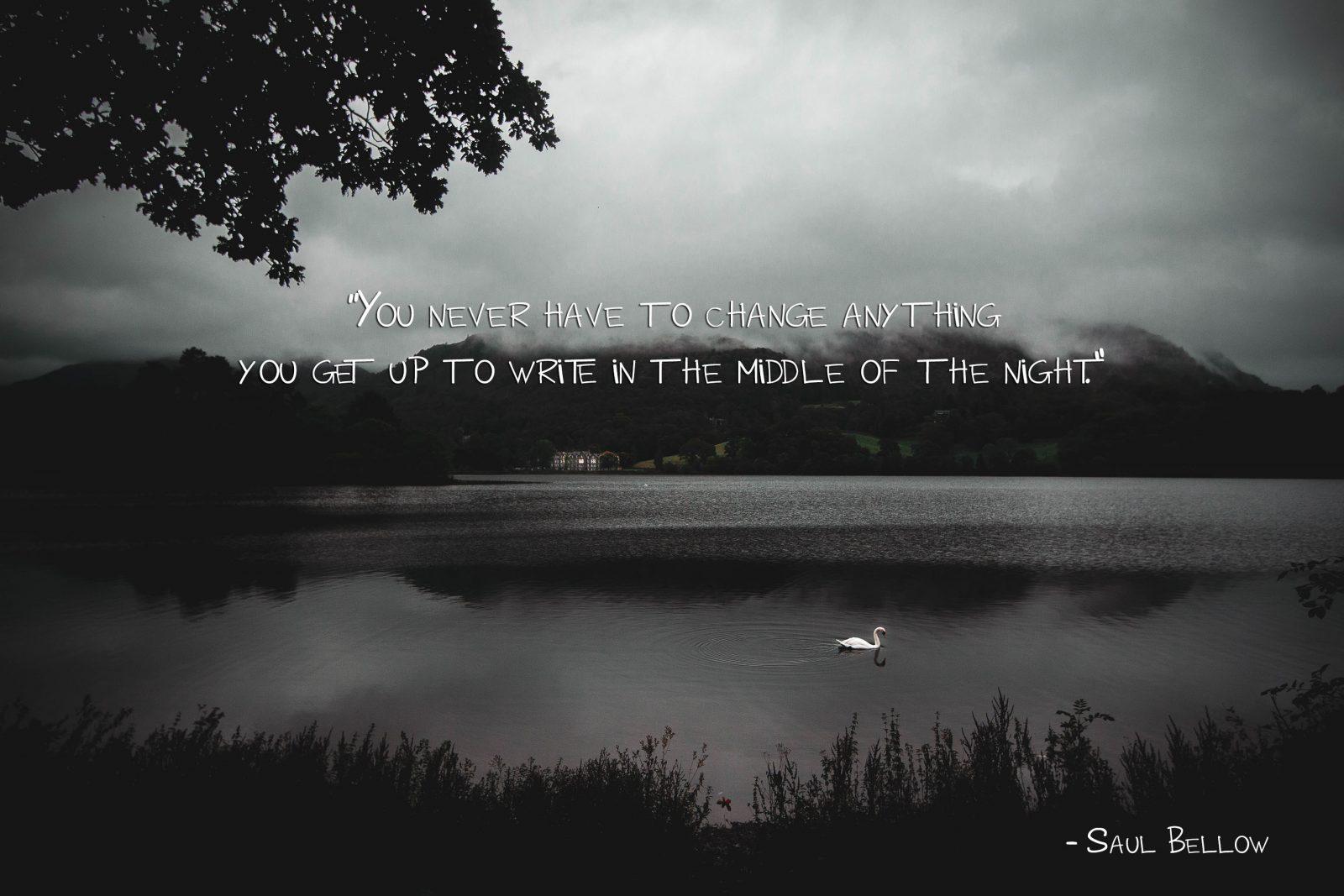 “You never have to change anything you get up in the middle of the night to write.”
-Saul Bellow

MIXED FEELINGS. I feel that any good writer revises… and then revises again and again… and then polishes… and then realizes another revision is in order…. thus more revising, then polishing, then proofreading, and so on and so forth. But I do love the sentiment of Bellow’s quote, because the heart of it is true for me. The times that I’ve found myself awake in bed with my mind spinning words and denying sleep, and I’ve given into the call of it, that 2AM writing feels effortless and inspired. And in the morning, when I look at the pages to see what I produced in a witching hour haze, I’m typically happy with the results (that is, happier than usual). 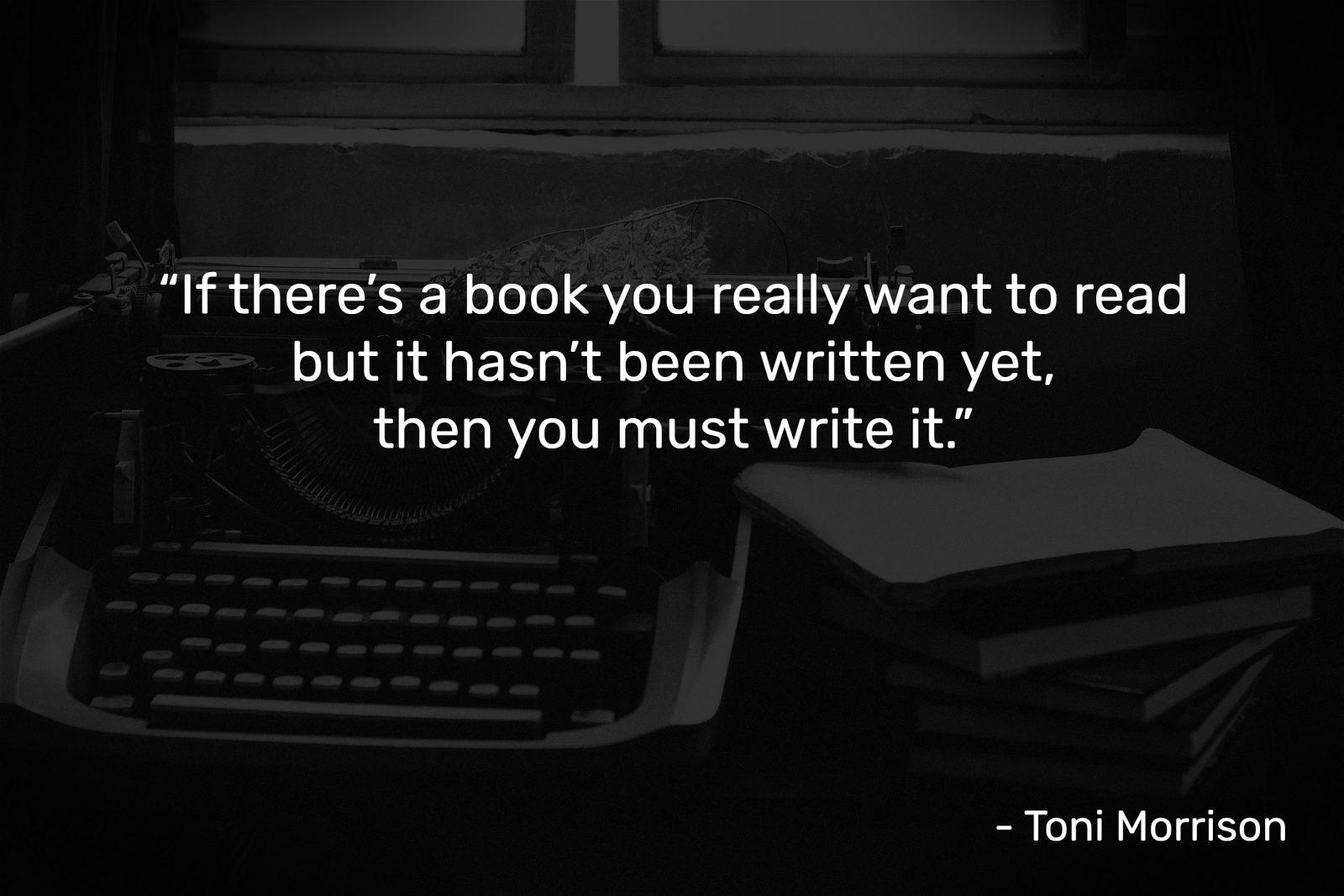 “If there’s a book you really want to read but it hasn’t been written yet, then you must write it.”
-Toni Morrison

AGREE. I mean, obviously. Do I even need to dissect this one? It’s just good and true.

Note: an alternate version of this quote attributed to Morrison also exists (“Sometimes if there’s a book you really want to read, you have to write it yourself.”). Other notable writers such as C. S. Lewis and Ann Patchett have all said very similar things. This idea is clearly a shared sentiment among many great writers. 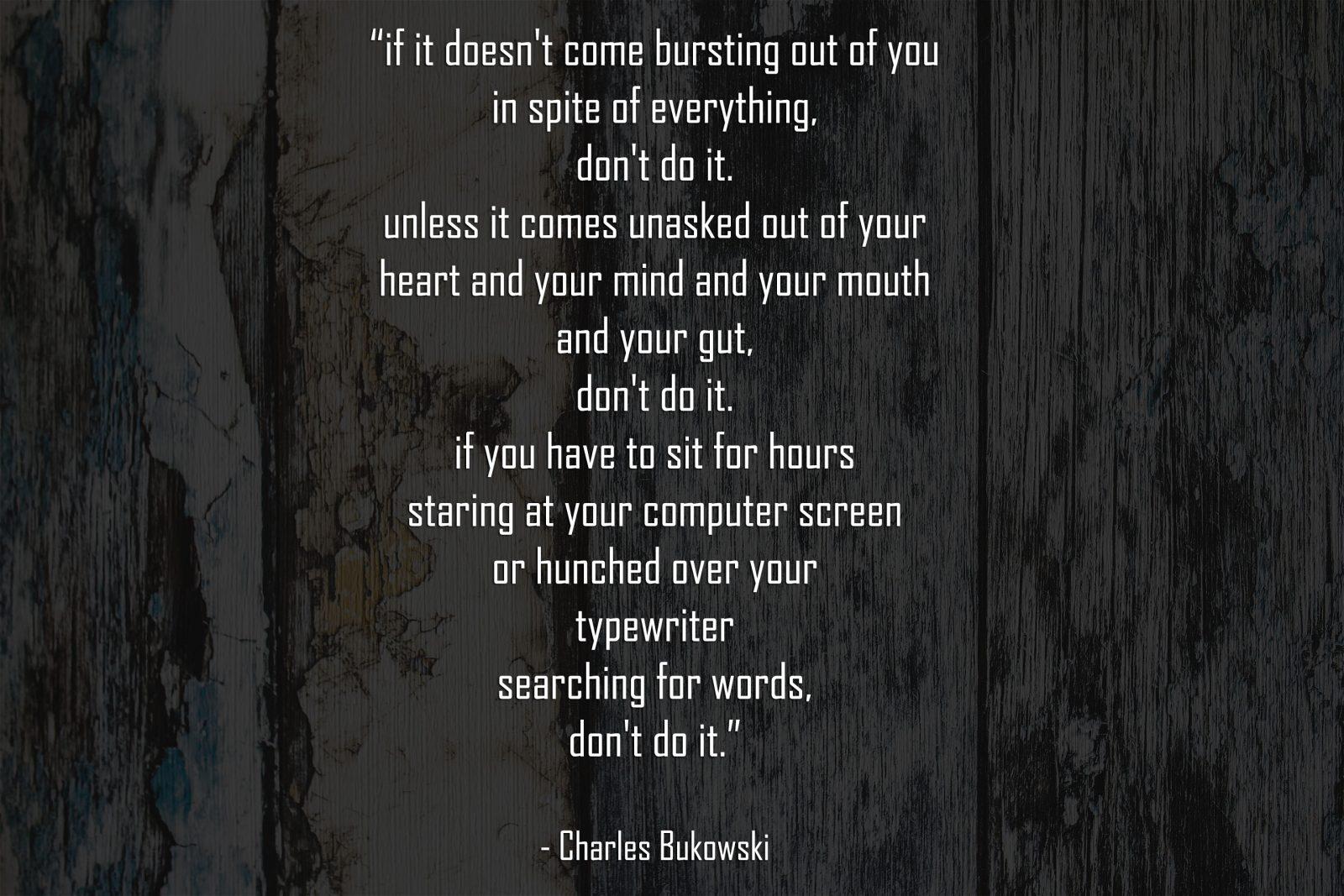 “if it doesn’t come bursting out of you
in spite of everything,
don’t do it.
unless it comes unasked out of your
heart and your mind and your mouth
and your gut,
don’t do it.
if you have to sit for hours
staring at your computer screen
or hunched over your
typewriter
searching for words,
don’t do it.”
– Charles Bukowski

DISAGREE. This poem by Bukowski titled “so you want to be a writer?” is much longer than this, and taken at face value, he’s basically saying that you shouldn’t have to work at writing. It should easily come out of you with burning inspiration and if it doesn’t, don’t even bother trying to do it. A later line in the poem says, “if you have to sit there and rewrite it again and again, don’t do it.”

I think we should consider if Bukowski might not have meant for this poem to be taken so literally, sort of like how Ernest Hemingway said, “There is nothing to writing. All you do is sit down at a typewriter and bleed.” We all know that Hemingway put intense thought into his writing. He famously didn’t love to talk about the craft itself, but he was a disciplined, obsessive writer. His style of direct, minimalistic prose was unusual at the time and in many ways, it changed the landscape of literature. Hemingway obviously didn’t really believe that all one had to do to write well was to be willing to pour out one’s emotions. Rather, Hemingway’s quote makes the point that writing can be gut-wrenching if you’re willing to go to raw, honest places.

So when I think about Bukowski’s poem, I wonder if it was written with a dose of sarcasm, frustration, or irony. The poem was published posthumously, so he didn’t necessarily mean for any of us to ever see it. I can picture Bukowski in a drunken stupor (as he often was), and perhaps he’s frustrated with the mythology around what it means to be a “real writer,” or maybe he’s experiencing writer’s block or crippling self-doubt. Or maybe he wrote this poem as a dare to aspiring writers. We don’t really know what Bukowski’s motivation was in putting these words to page. So it’s not so much the poem itself that I disagree with as it is the fact that I see people quote it as though it’s an inspiring rundown of the writing life. I even saw a YouTube video once where this poem served as the narration over a montage of film clips of writers pouring out their souls over typewriters and notebooks. The irony is that the writers in the film clips were working hard, really hard, at writing.

Writing takes discipline. Writing is hard work. And sometimes, yes, it is an inspiration that comes bursting out of your heart, mind, and gut. Sometimes I have those times myself – moments, hours, days, and nights – those precious writing sessions where it feels like I’m catching a wave of words and I ride it as long as it’s there for me. But if I only were to write when I felt that way, I’d never finish anything. So while I appreciate Bukowski’s acknowledgement that passion can fuel great writing, I also call BS on the notion that if you have to work at it, don’t bother doing it. 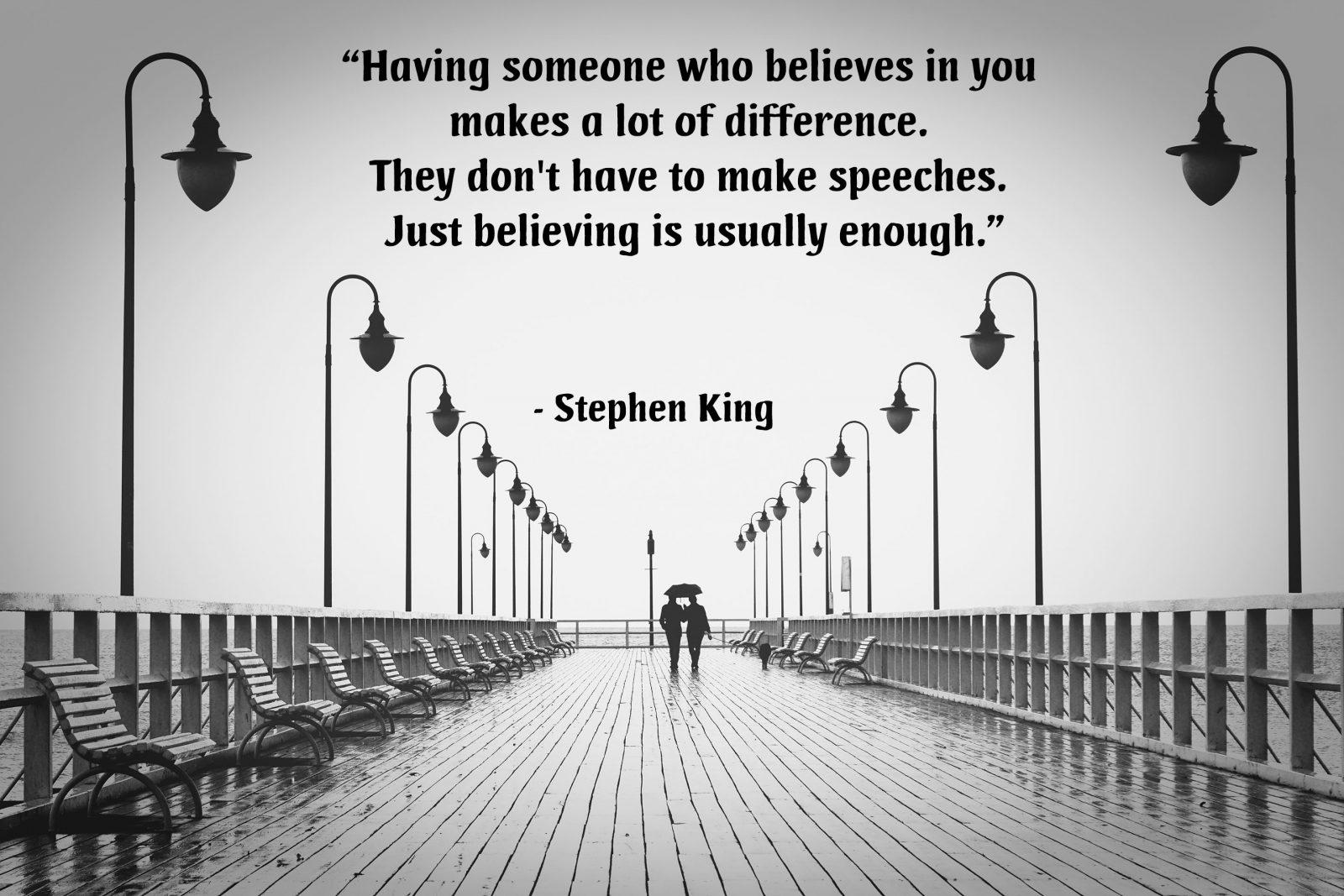 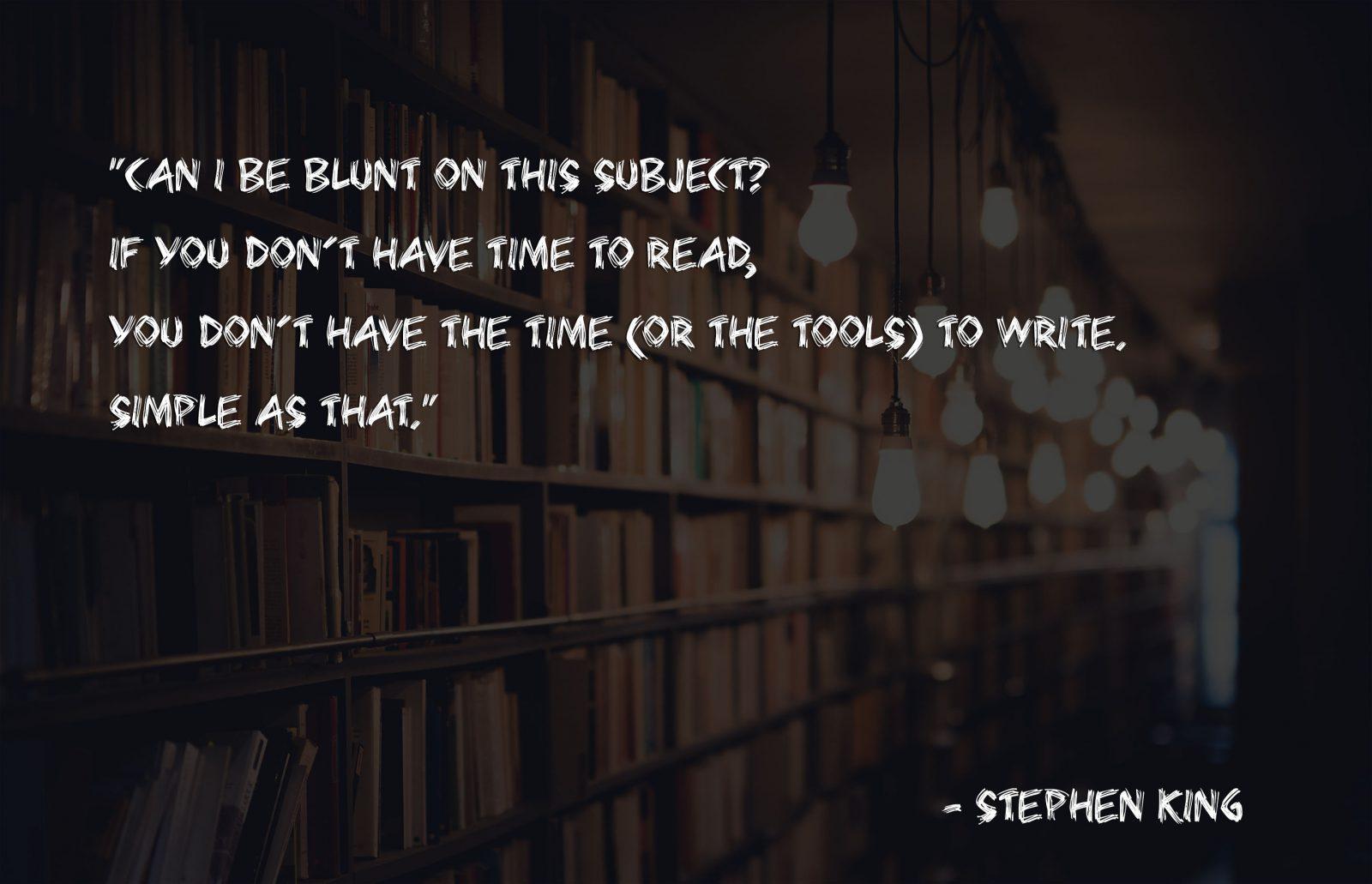 “Having someone who believes in you makes a lot of difference. They don’t have to make speeches. Just believing is usually enough.”
― Stephen King

AGREE. I’m giving Stephen King two quotes because his memoir On Writing: A Memoir of the Craft is really good, and it’s hard to choose just one quote.

First, I do think it’s so important to have support. For me, that belief makes a huge difference in my own mentality. If you feel like no one believes in you though, let it light a fire under you and then prove them wrong.

Second, if you’re going to be a writer, you better be a reader. It seems like this should go without saying, except a lot of people seem to have a secret desire to write a book. They think, “Someday I’ll do that! Someday it will burst out of me!” (a ‘la Bukowski style?) The problem is that a lot of these people don’t read novels very often or at all. If the sum total of your reading in the last decade is the Twilight series, then sorry, you shouldn’t be writing a book. Stephen King got this one right. But if you really want to be a writer, crack open a book. Or a few. Or more like five hundred. 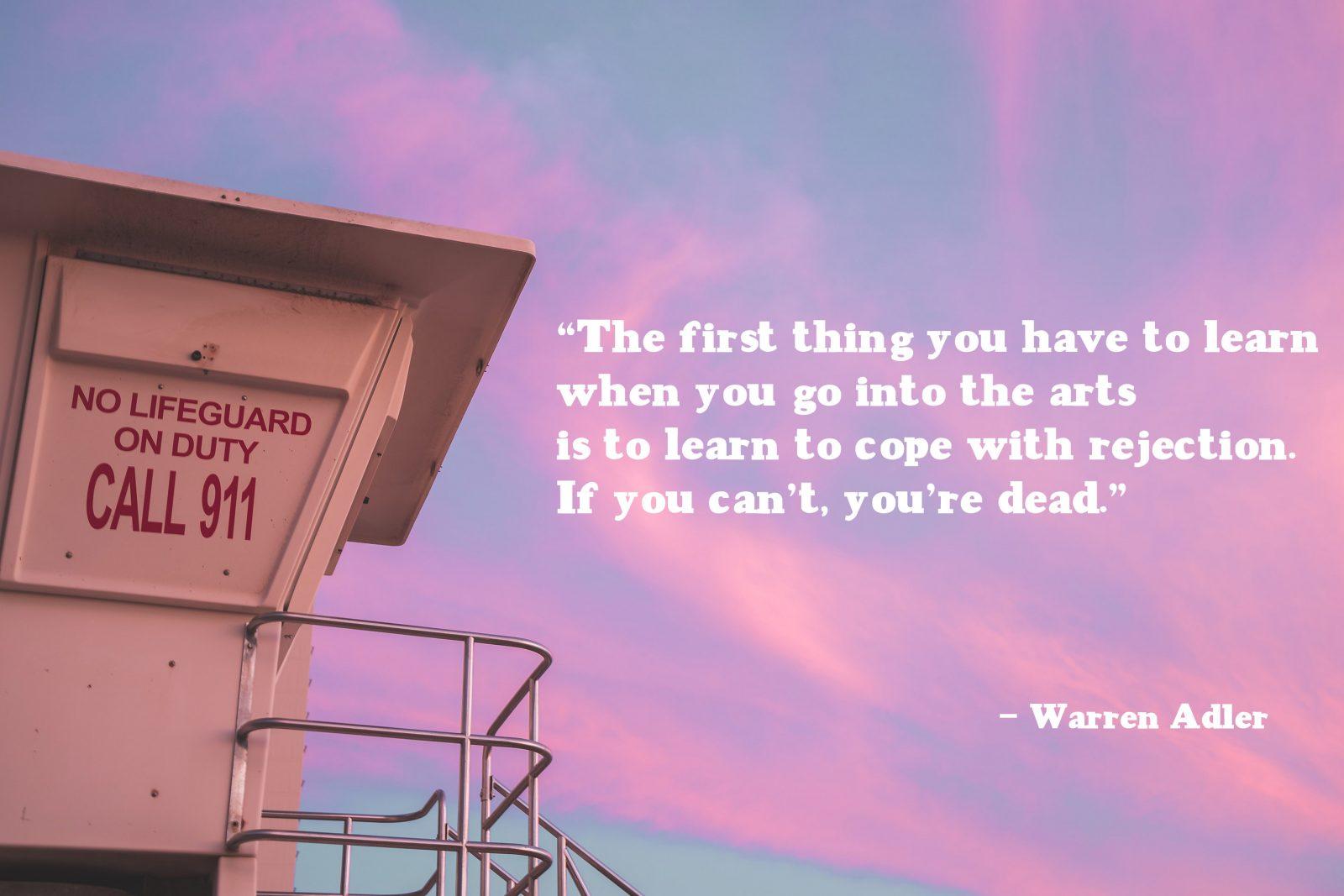 “The first thing you have to learn when you go into the arts is to learn to cope with rejection. If you can’t, you’re dead”
― Warren Adler

AGREE. I will add that you shouldn’t take rejection too personally either. Everyone has different tastes and preferences when it comes to books, movies, and music. Therefore, not everyone will like what you write. And in the entertainment industry and the literary world, timing, trends, and relationships matter so much. A rejection doesn’t automatically mean that your work isn’t good. It just isn’t right for that particular place at this particular time or for that particular person or company. Take in the constructive criticism, shrug off the garbage, and just keep going. 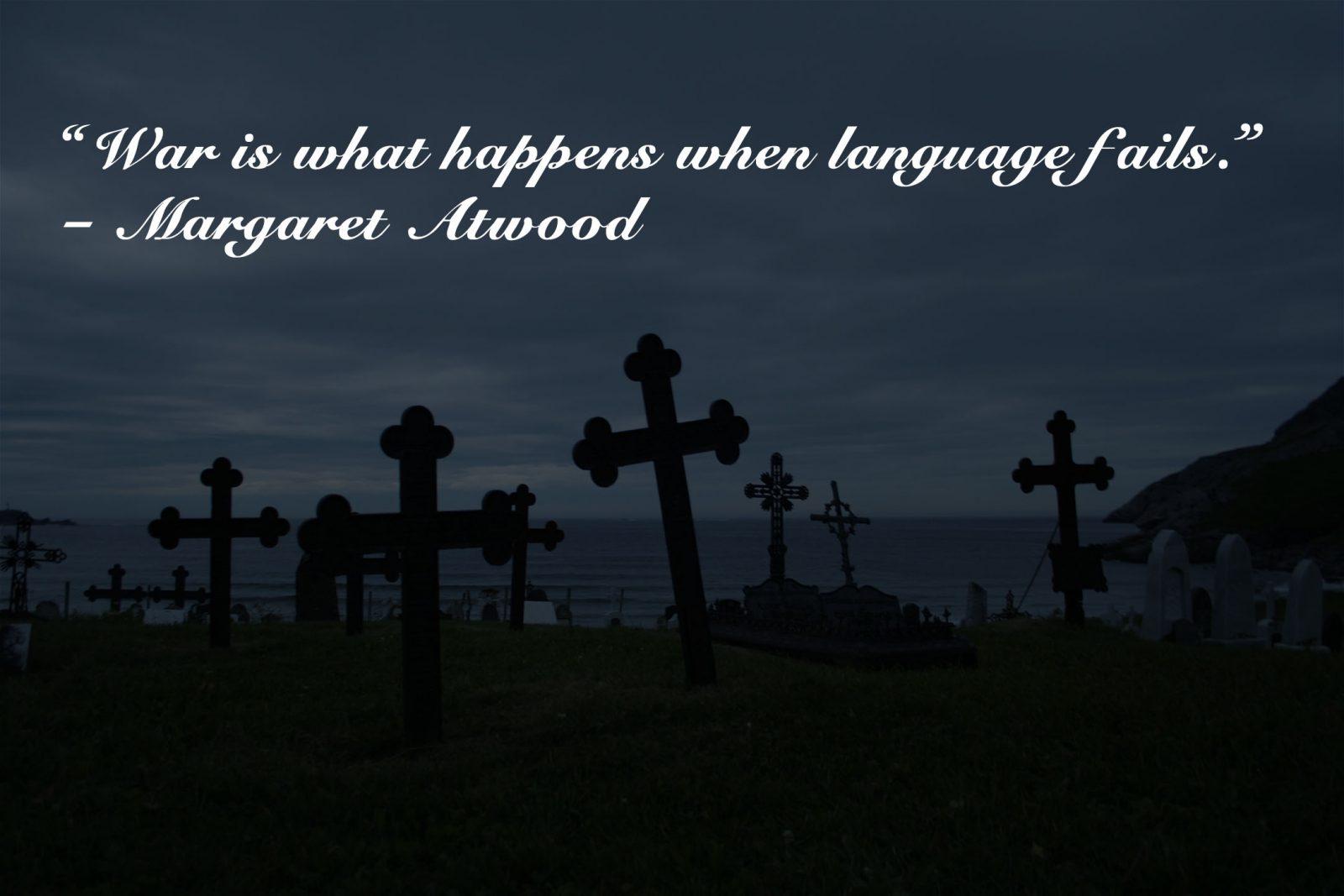 “War is what happens when language fails.”
– Margaret Atwood

I wish this one weren’t true, but it is. Maybe if writers ran the world, we’d have more empathy and fewer wars. Just an idea, and I’ll leave it at that.