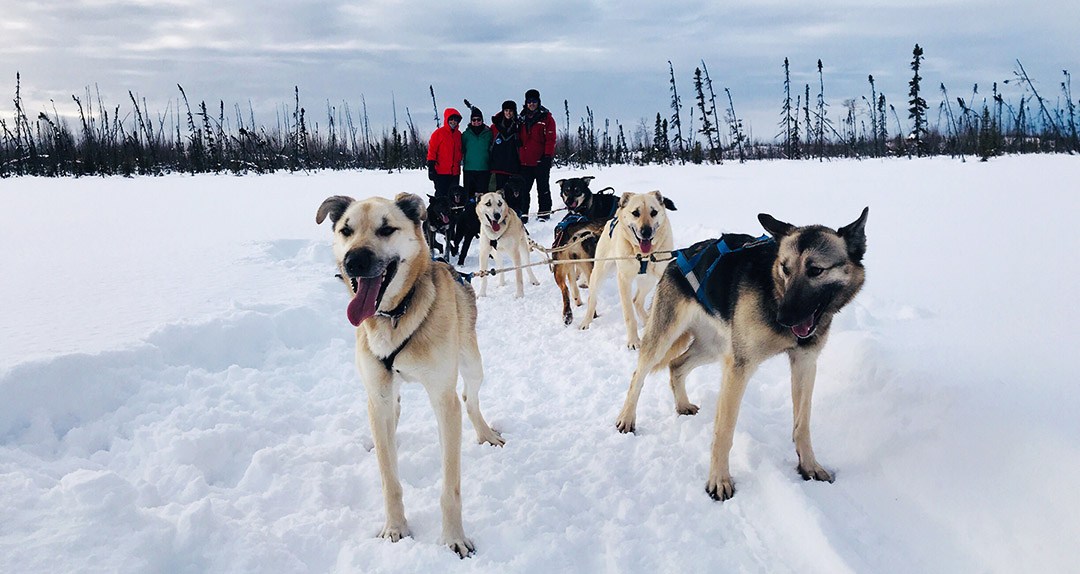 Last month, my family took a vacation to Alaska. It was my first time visiting the state, and I was astounded by its natural beauty. I’ve been to about half of the states in the USA, and my home state (Washington) is easily one of the most beautiful. So it takes a lot to impress me, but Alaska definitely did. Just driving the hour and a half from the Anchorage airport to the Alyeska Resort in Girdwood felt like a tourist activity, because the sights out the car window were so stunning. It was endless snow-capped mountains and ocean inlets full of big chunks of glacier ice.

Of all the activities we did during our week in Alaska, my favorite was dog sledding.

Before I tell you about my experience, I think it’s worth acknowledging that right now is such an uncertain and scary time. Why am I even writing a blog about dog sledding when the idea of taking a vacation feels like a faraway concept? Maybe you even had your own highly anticipated vacation planned that you sadly had to cancel due to the pandemic. Maybe you’re sick right now, or you might be feeling stressed out and isolated.

I’m writing this because while it’s true that you can’t go on vacation today, we will come out the other side of this, and you will once again be able to have new experiences in new places with loved ones. And when you do, I encourage you to consider a winter vacation to the state of Alaska, and be sure to include dog sledding on your itinerary.

For our own dog sledding adventure, my family headed to Happy Trails Kennels in Big Lake, Alaska, about an hour and a half north of Anchorage. It’s owned by Martin Buser, four-time Iditarod champion, and dog sledding excursions are offered there through the Alaska Mushing School. You can even stay overnight at their bed and breakfast, which would give you extra time to play with the dogs.

To give you a little history, the Iditarod Trail Sled Dog Race is an annual long-distance sled dog race that started in 1973. It’s held every year in March in Alaska, and it typically takes 8-15 days for mushers to cross the finish line with their dogs (a musher is the driver of the dog sled). While most of the mushers and dogs hail from Alaska, competitors from fourteen countries have competed, including Buser, who is Swiss and was the first ever foreign winner in 1992.

So in choosing to do our dog sledding adventure at Happy Trails Kennels, we were at a place very rich in Iditarod history. 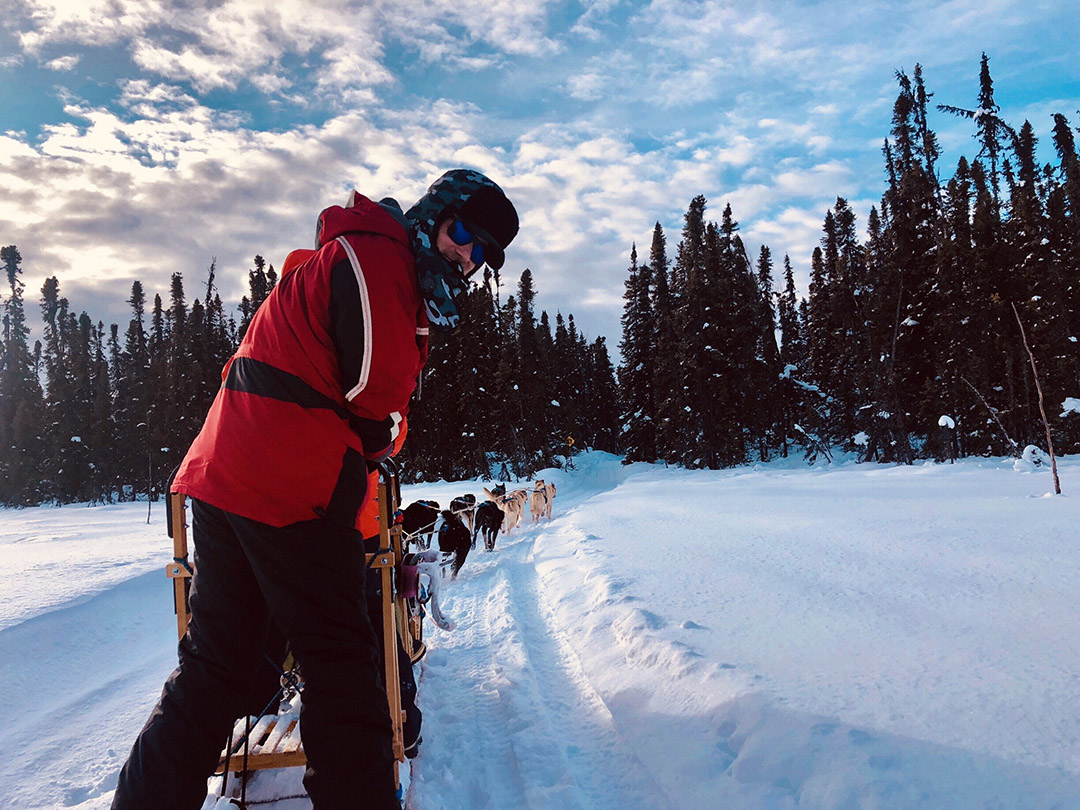 My family of eight was split into two sleds. My husband Eric, my cousin, my cousin’s wife, and I were in a sled with musher Michael Baker, who has competed in the Iditarod twice and plans to compete again in 2021. The other sled was driven by musher DeeDee Jonrowe, who is a three-time Iditarod runner-up and holds the fastest time ever for a woman. My parents, my sister, and my niece were in that sled.

My group headed to our sled and met our dogs, who were all so sweet and friendly. Centuries ago, Huskies and Malamutes and other similar dogs were bred for transportation purposes in snowy climates. The result is that we now have certain kinds of dogs that are ideal for dog sledding. They are strong with thick coats that keep them warm, and they have personalities that like being in groups with fellow dogs and bonded to their musher. Just like herding dogs instinctively enjoy rounding up cattle, sledding dogs get excited to go out sledding. 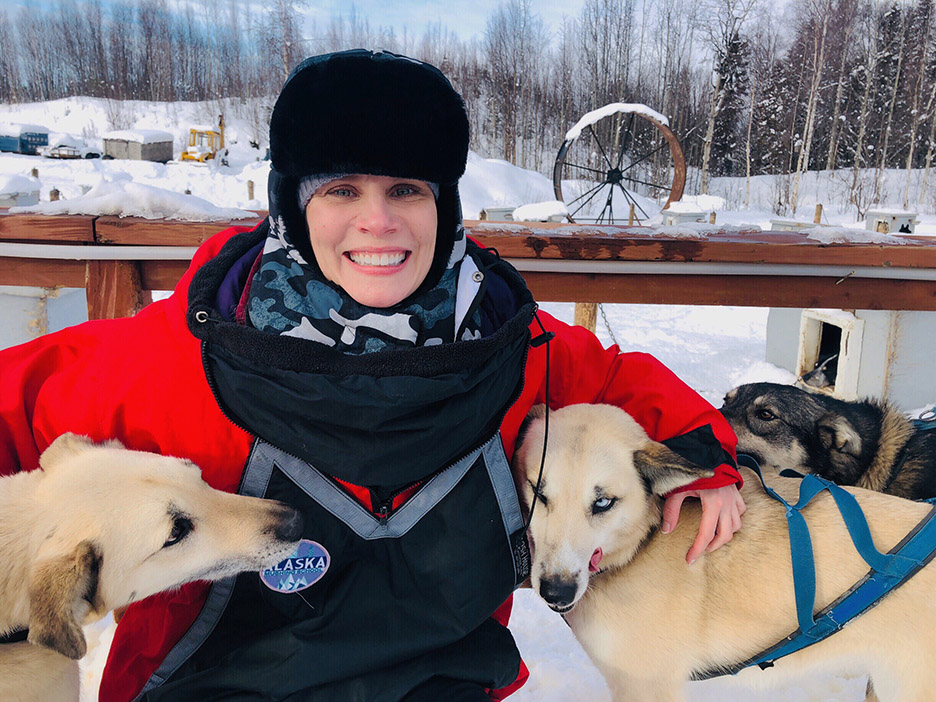 Prior to my sledding experience, if I had any question in my mind as to whether or not these dogs like pulling the sleds, the answer is now a resounding “yes.” The dogs we met were very happy animals, and our mushers were clearly animal lovers. As Michael gave us some last minute instructions before departure, the dogs were jumping around and barking, eager to get going on the trek. When he released the brake and gave them the command to go, they took off running with their tails wagging.

The sled that we took out had three standing spots and two sitting spots. Throughout the journey, we stopped several times to switch spots with each other. We were lucky in that it had snowed a lot the day before, so there was fresh powdery snow on the ground. The night before, Michael had gone out on a snow mobile to cut us a trail for sledding.

It was a warm day with the temperature in the low 30s. They offered us heavy coats and pants to wear over our own clothes, but I was the only one in my family to take a coat (I tend to run cold). It kept me toasty, so even if you were dog sledding on a very cold day, I’m confident that their clothing options would keep you comfortable.

Happy Trails offers dog sledding excursions of various lengths. We chose the shorter excursion, which gave us about ninety minutes out on the sled. In the future, I would choose a longer trek, because it goes really fast. I found myself wanting to take it all in organically without any devices to distract me, but I also wanted to record as much of it as I could before our short time was over. So I alternated between talking with my sled companions, asking Michael questions about dog sledding, silently absorbing the beautiful landscape, and taking photos and videos of the afternoon. 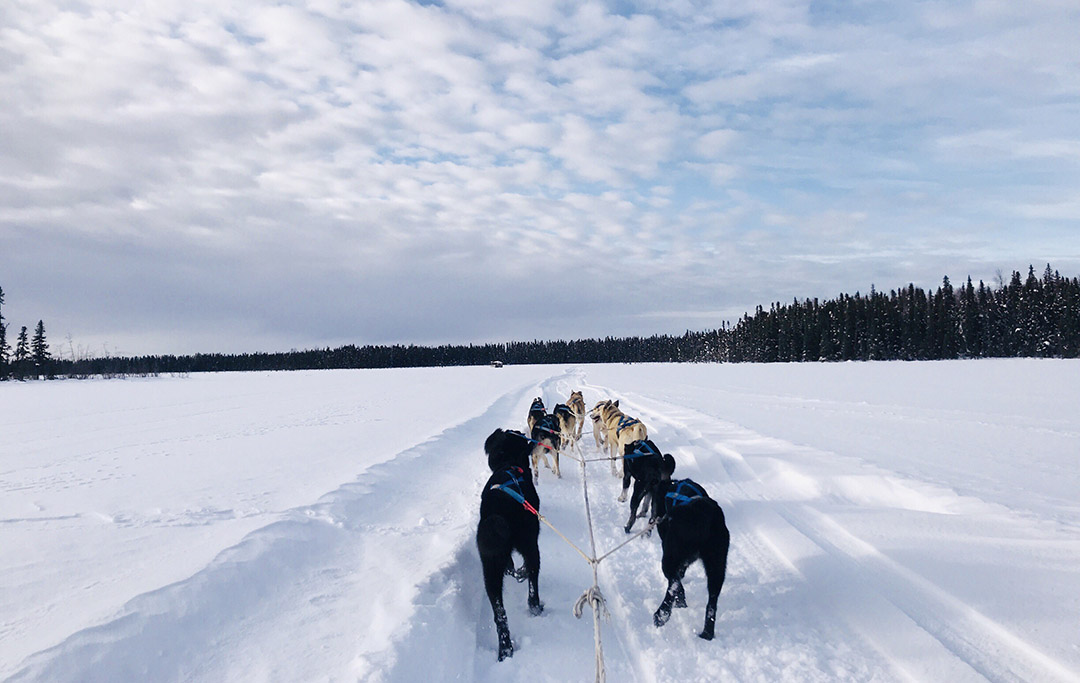 Dog sledding is thrilling, but it’s not a blood-rushing, precarious kind of thrill. Rather, it’s thrilling in a peaceful, awe-inspiring way. The dogs took us out into the snowy countryside where it was quiet and still and you couldn’t see evidence of civilization in any direction. Whenever we’d reach a fork in the trail, Michael would give a one-word command and the dogs would head in the instructed direction. The lead dog at the front of the group often looked back to make sure his fellow dogs were following.

At one point, we saw fresh moose tracks in the snow that Michael told us hadn’t been there during the sled trip he had guided earlier in the day. He explained that if we were to see a moose, it would give the dogs a “moose boost” (they would get excited and run faster).

The sled was never traveling at a breakneck pace. In fact, if you were to fall off of the side of the sled into the snow, you probably wouldn’t even be hurt. Early in the trip, Michael warned us that we might have to do a “head-on” at some point, because he had no idea which direction DeeDee had set off in. What he meant by this is that we might find our two sleds headed right at each other on the trail, which was only meant to accommodate one sled at a time. I suspect the “head-on” is purposefully orchestrated on every trip with a two-sled party in order to give us sledders a little excitement. Because yes, I felt some exhilaration as we saw the other sled in the distance coming down the trail right towards us. I asked Michael if the sled might tip over, and he said it was a possibility. He then instructed us to move to the right of the sled and lean as we passed by each other. You can see the” head-on” in my video montage. I don’t think we were ever even close to tipping over, but the idea that we might tip over gave us all an adrenaline rush.

After both sleds returned to Happy Trails Kennel, we got to play with the rambunctious puppies.

Dog-sledding is a great activity for all ages! From my nine-year-old niece to my young-at-heart parents, we all really enjoyed it. Back at the resort that night, we were already talking about how we all wanted to go dog sledding again next year.

So I guess it’s official: We’re hooked. Maybe next time, I’ll even take an instructional course through the Alaska Mushing School, which teaches you how to guide the sled yourself… The possibilities are endless! Iditarod, here I come (just kidding).