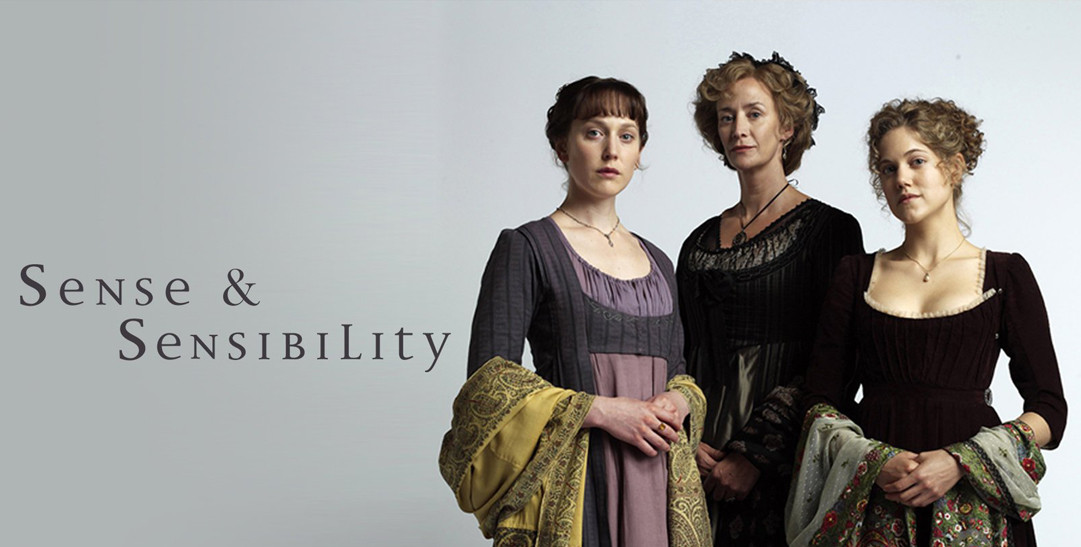 Valentine’s Day is tomorrow, so it seems like a great time to highlight my very favorite Jane Austen screen adaptation. The award goes to…

Before I launch into my love of this version, I should mention the Oscar-nominated 1995 movie version directed by Ang Lee. It’s a very lovely movie, and I know that many Austen fans love this version starring Emma Thompson, Kate Winslet, Hugh Grant, and Alan Rickman….

But, I really, really feel the 2008 BBC version is far superior, and I’ll tell you why… 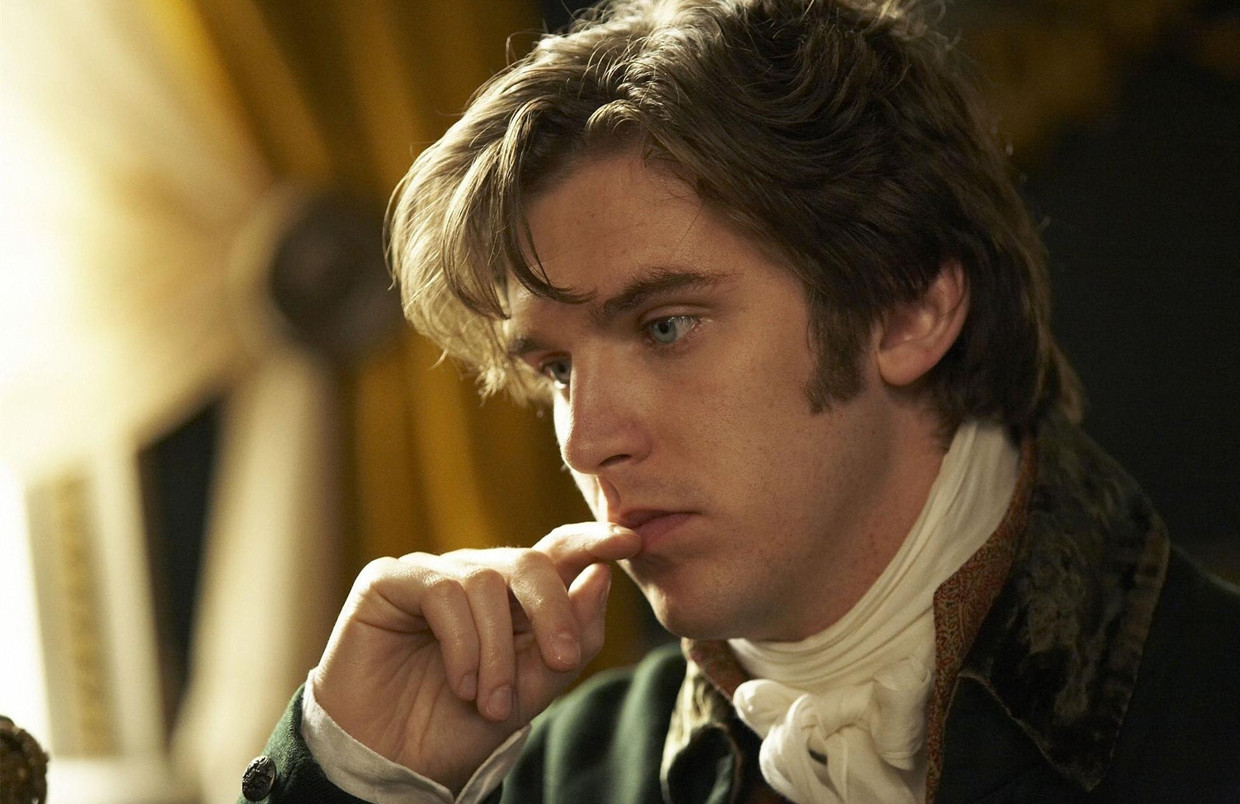 First of all, the time constraint of only two hours for the 1995 movie means less development of each relationship. Sense and Sensibility contains two romantic storylines – one for each sister – as well as some lovely subplots, and it’s really hard for a two-hour movie to do it justice. There simply isn’t enough time to cover it all. Yes, the screenplay won an Oscar. Yes, I agree that Thompson wrote a great two-hour adaptation. But there is just so much more to love than two hours can provide…

The 2008 mini-series is only one hour longer with its three one-hour episodes. But that’s 33% more material to be able to include. More scenes with Elinor and Edward! Hooray!

So now I’m going to lay it out for you. This is why the 2008 version is a masterpiece (and I will draw comparisons to the 1995 movie). 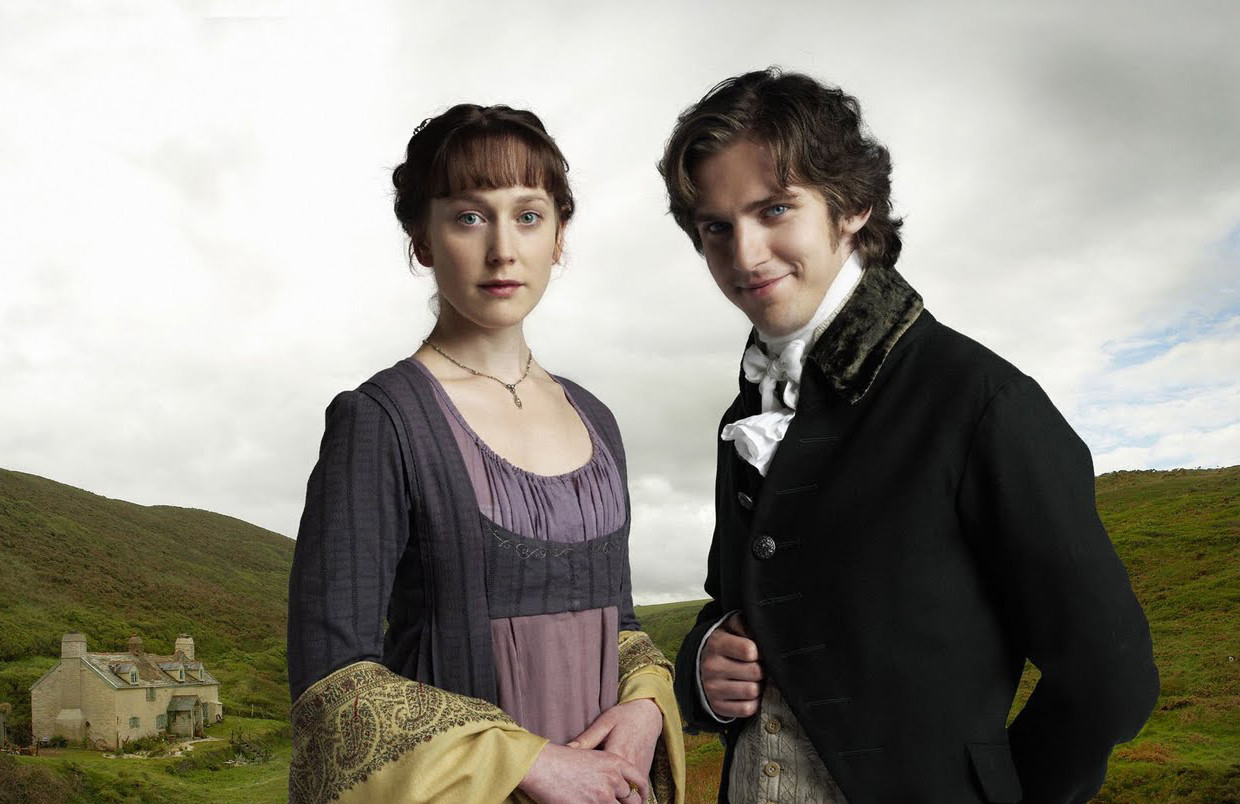 Hattie Morahan as Elinor is the heart of this mini-series. Her love for Dan Stevens as Edward is a living, breathing thing. When she expects an engagement and only receives a goodbye book of poetry from him, the pain that they both feel in that moment is like a stain in the air that covers the entire estate. As the Dashwood carriage pulls away, at the very last moment Elinor steals a glance at Edward that will break your heart. And that’s just in the first episode!

Throughout the story, Elinor carries her pain with a spine of steel yet durable hopefulness, and so in those later scenes where she finally allows herself to break down and express her deepest feelings, it is gut-wrenching.

Dan Stevens adeptly captures the conflict within a young man who is torn between his feelings of obligation and his feelings of desire and love. Because this version is longer than the 1995 movie version, you are treated to scenes that could not make the movie cut that give you more of Edward’s story and how tormented he feels by his inner conflict.

When Elinor and Edward finally can be together, it is moving and wonderful. The romance between these two is one of my favorite on-screen romances ever. 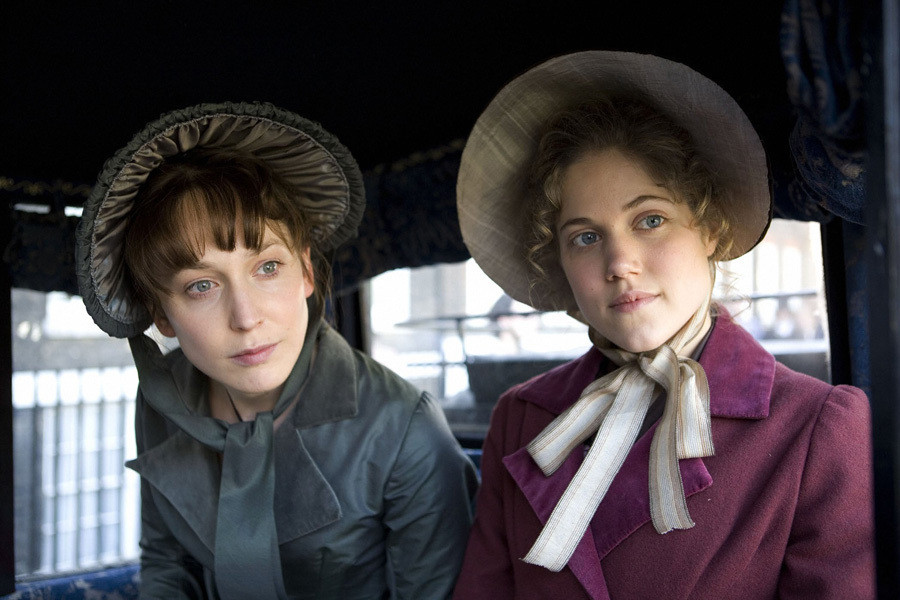 The casting of the two leads in the BBC version with Hattie Morahan as Elinor Dashwood and Charity Wakefield as Marianne Dashwood is perfect. They are both very talented actresses who deliver moving performances (especially Morahan, who makes me cry more than once every time I watch it). And just as importantly, the casting of the BBC version is actually age-appropriate to the material. Unlike the 1995 movie.

Now let me first say that I think Hollywood is a horribly ageist place, especially towards women, so I love to see women in their 30s, 40s, 50s, and older starring in films. And I also give Emma Thompson big props for both writing and starring as Elinor in the 1995 movie. She won the Oscar for Best Adapted Screenplay! As a writer-actress myself, I love to see women write the roles they want to play. That said…

It’s kind of hard to completely forget that the Sense and Sensibility novel is a story about the first romances of two young British sisters, Elinor and Marianne (ages 19 and 16 respectively). Elinor falls in love with Edward, age 23. Marianne eventually gives in to the romantic overtures of Colonel Brandon, age 36. Even if you haven’t read the novel (which I actually haven’t), if you’ve read or watched any stories that take place in the 1700s in England (which I have, lots), you know that the age in which women are courted for marriage is typically their late teens. By mid-twenties, unmarried women are considered spinsters. 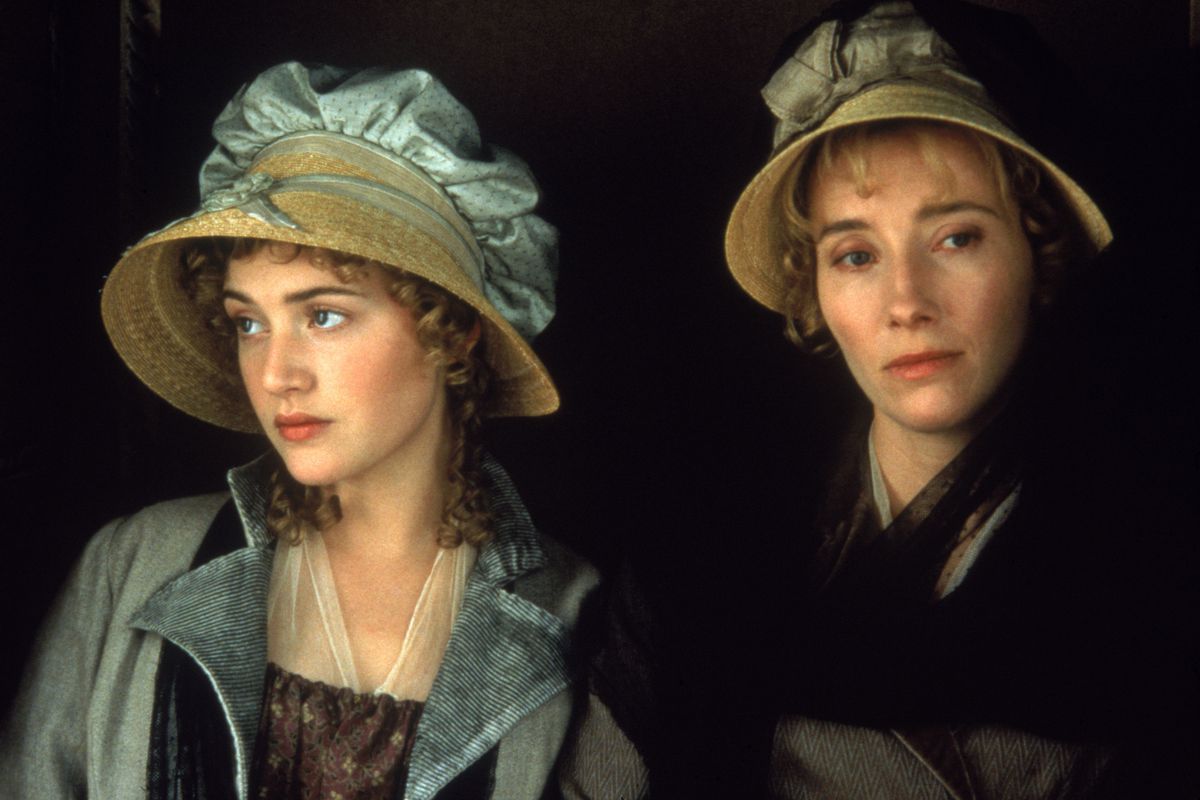 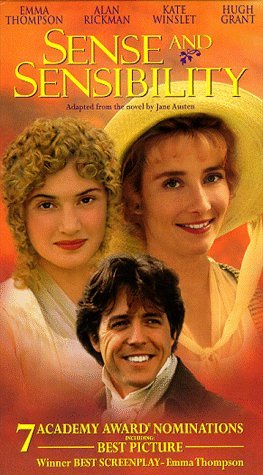 So to me, in the 1995 movie, Thompson (as Elinor) and Grant (as Edward) seem very out of place with the time period. Thompson was 36 years old at the time of filming and Grant was 35 years old. They both (especially Thompson) carry an air of maturity about them – worldly and wise. They feel more like parents than young adults on the brink of growing up. And the youngest Dashwood sister is 13 years old, so she seems more like Thompson’s daughter than her sister in the film.

Additionally, the back story of Edward’s secret betrothal goes back to his days in school. Even if you aren’t aware that Edward was originally written as a character of 23-years-old, it’s a very strange plot point within the movie given the appearance of Grant’s age. The first time I ever saw it, I found myself asking, Has Edward secretly been engaged for twenty freaking years? I was confused. Because I got the impression just from looking at Grant that Edward’s schooling days must be long past.

I also feel like the 30-year age gap between Kate Winslet’s Marianne and Alan Rickman’s Colonel Brandon is too big. She was 19 at the time of filming and he was 49. Yes, the characters do have a large age gap in the book (20 years), but not this large.

While I like every single actor that appears in leading roles in Ang Lee’s 1995 movie, and I think their performances are very good, I’ve always felt the casting didn’t fit the characters. I feel like the casting of the 2008 mini-series is more fitting for the story, which leads me to… 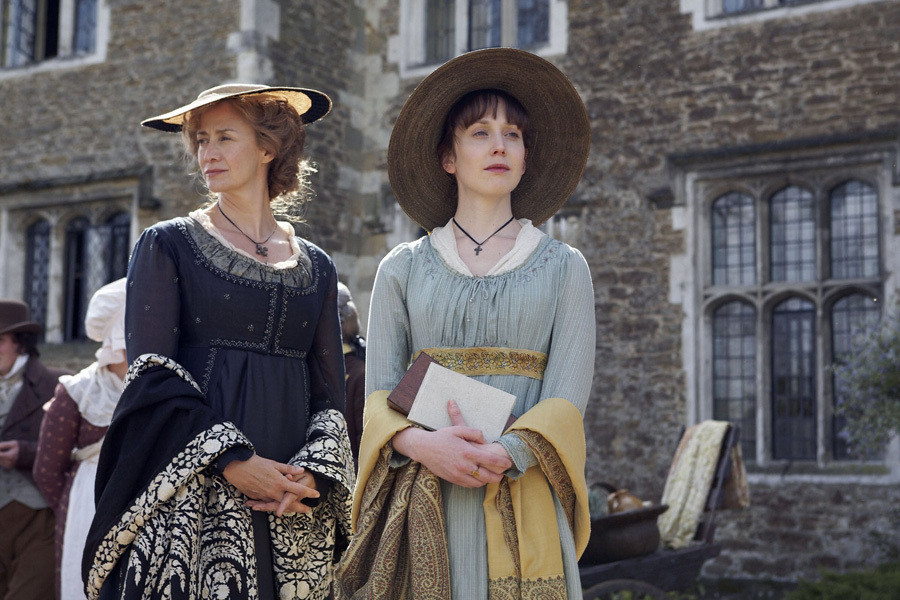 Janet McTeer as the mother Mrs. Dashwood gives a solid, heartfelt performance. She feels her daughters’ heartbreak as her own, but she stands strong and never wavers in her hope that they will find happiness. She’s not a perfect mother, but she loves them perfectly.

Middle sister Marianne is portrayed by Charity Wakefield with sassiness and romanticism. And youngest sister Margaret has great spunk. You really feel for the young girl when she laments, “Girls never get to do anything. Men ride about the country and do things, and girls just sit and wait for things to happen.”

The entire cast is awesome from the horribly snobby Fanny portrayed by Clare Skinner to the charming rascal Mr. Willoughby portrayed by Dominic Cooper. 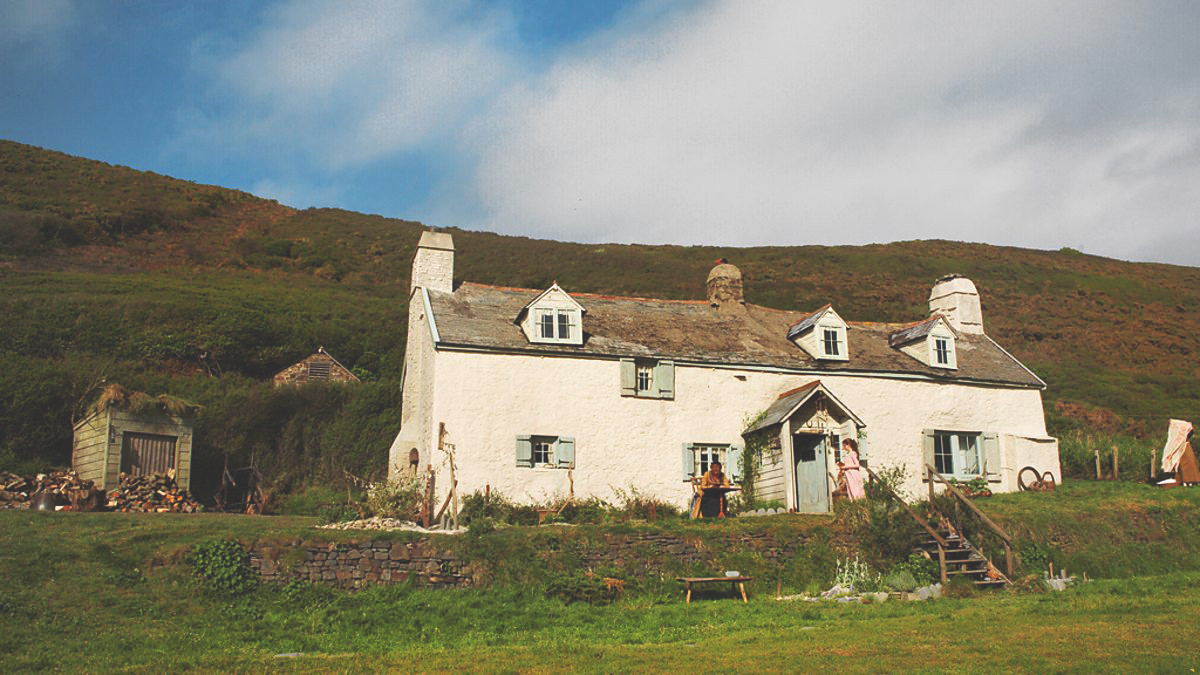 After the Dashwood women lose their fortune, they must move to a cottage next to the sea in Devonshire. The cottage featured in the mini-series is picturesque in its crumbling beauty. I can taste the salt in the air and feel the soft ocean spray on my face in the scenes where the girls go walking outside.

The interior of the cottage has a slightly dismal quality about it that illustrates the state of the financial and social affairs of the Dashwood women. The house by the sea in the 1995 movie is much nicer, but I prefer the darkness. It creates a moody atmosphere, and it makes the light that eventually enters the women’s lives that much sweeter. 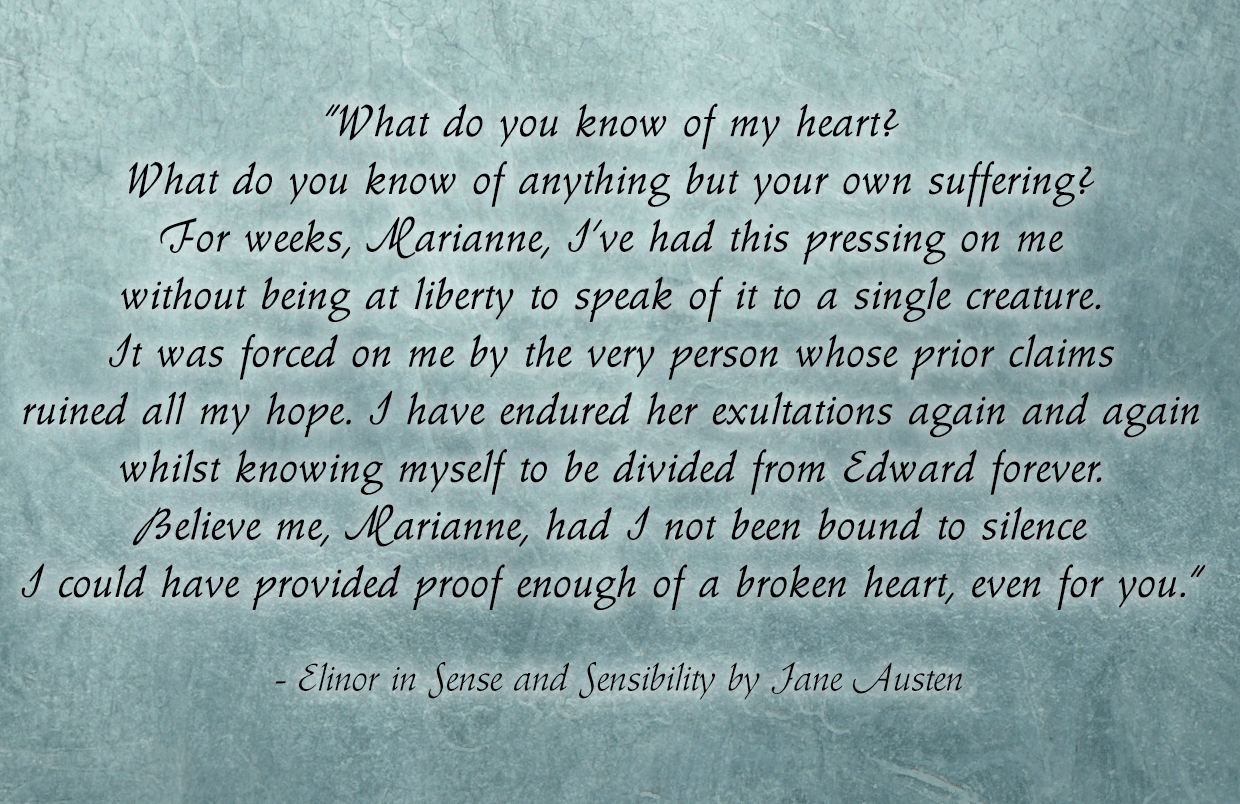 The entire score by Martin Phipps is beautiful. The standout part for me is the composing for Elinor when she feels secret pain or when she has solitary scenes in which she reflects on Edward. In the scene where Elinor has stolen away to hide in the seaside cave and cry, the music swells with the oceans waves, and it’s deeply moving. 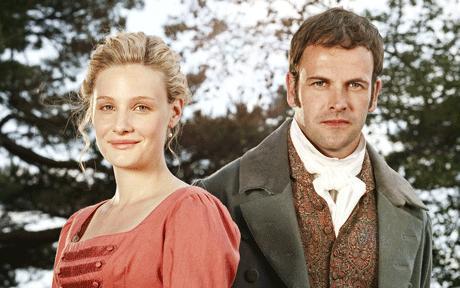 So, there you go. If you’re looking for a romantic movie, I highly recommend the 2008 BBC version of Sense and Sensibility. You won’t be disappointed. xoxoxo

PS. That said, also check out the 2009 BBC 4-hour mini-series of Emma, starring Romola Garai and Jonny Lee Miller. It is overflowing with charm, wit, and heart. And Romola Garai was nominated (rightly so!) for a Golden Globe for her performance.