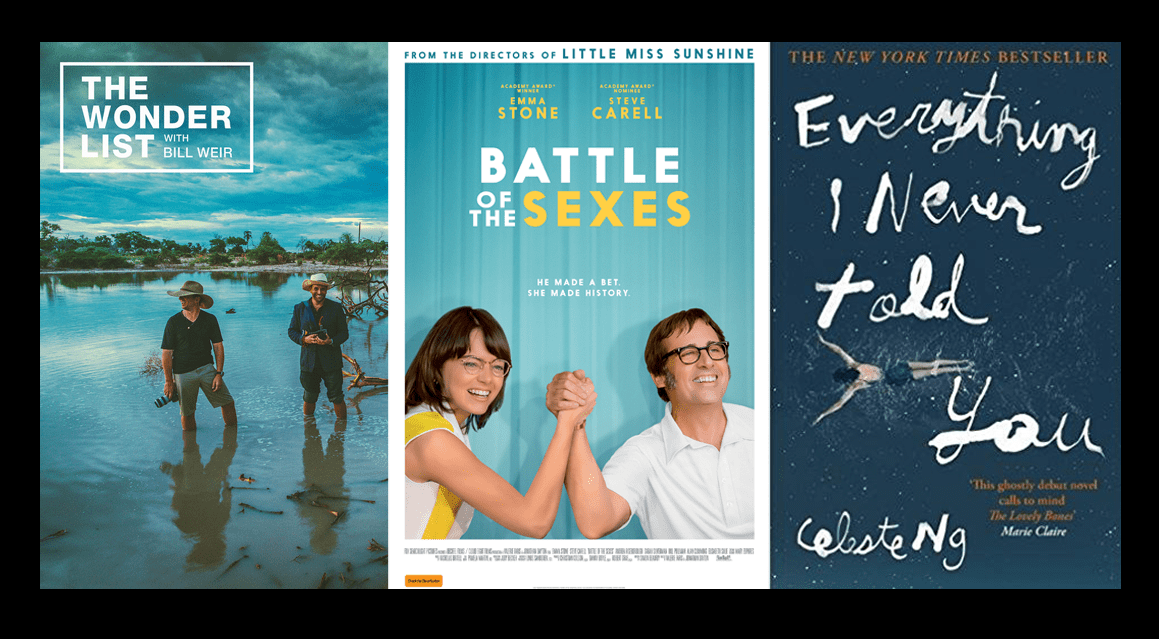 Summer vacations are long gone, back to school madness is over, and the holidays are still a ways away. This means you finally have time to read books, watch movies, listen to music, and appreciate art. Perfect! Because I have some recommendations for you.

The Art of Peregrine Heathcote

I recently stumbled across a painting by British artist Peregrine Heathcote, and I fell in love with his style and the warm, rich color tones of his work.

Heathcote studied his technique in Florence, Italy, and in a 2010 interview when he was asked about his favorite subject matter, he answered with this: “Mysterious beauty, an intimate moment between a couple, different textures, and the motion of wind in fabrics.” Which pretty much sums up why I love his art. It’s true, you can feel the wind in his images. 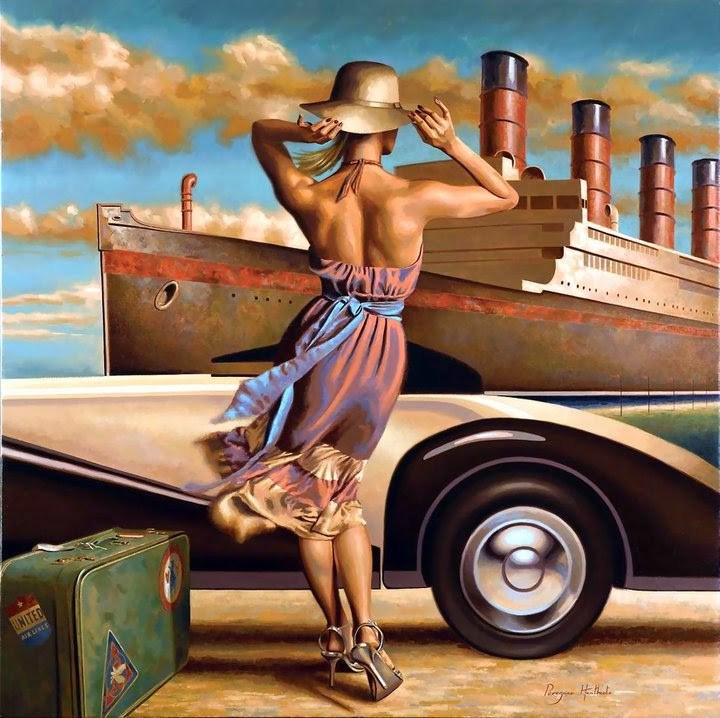 Battle of the Sexes (movie)
In theatres now

I grew up with sports as a major part of my childhood and teen years. Had it not been for women like tennis player Billie Jean King or for legislation such as Title IX, which made it so that females could not be excluded from participating in sports because of gender, I might have had a very different childhood. So I was very moved by this movie and its portrayal of Billie Jean King and other female tennis players fighting to earn the same money and respect that the male tennis players were getting. It’s an important true story, and King’s grit (portrayed wonderfully by Emma Stone) is inspiring.

But this movie is also super fun! The climax of this story is of course the infamous tennis match, dubbed the Battle of the Sexes, between King and retired male tennis great Bobby Riggs (portrayed with flare and humor by Steve Carell). Riggs was willing to do almost anything to stay relevant in the public eye and continue competing in his beloved sport, even playing up male chauvinism in order to get attention and coax King into facing off against him. Their battle of words is as great as their battle on the tennis court, which is presented really effectively so you can follow all the key moments of the match.

Along with the male-female battle, the very married King is facing her own internal battle. The movie shows her finally coming into her own sexuality as she tries to understand and accept her growing attraction to the team’s female hair stylist. It’s a poignant love story that brings up the complications of commitment – to one’s true self, to others, to ideals, to a mission.

The battle for equality of all kinds is still on today, and this movie gives us a story that is historically significant, emotional, and very fun.

Yes, she wore a meat costume that one time. And she’s also won 6 Grammy Awards and a Golden Globe. But who is the real woman behind this unusual artist who is sometimes so bold in her public presentation that she feels almost like a caricature of herself? 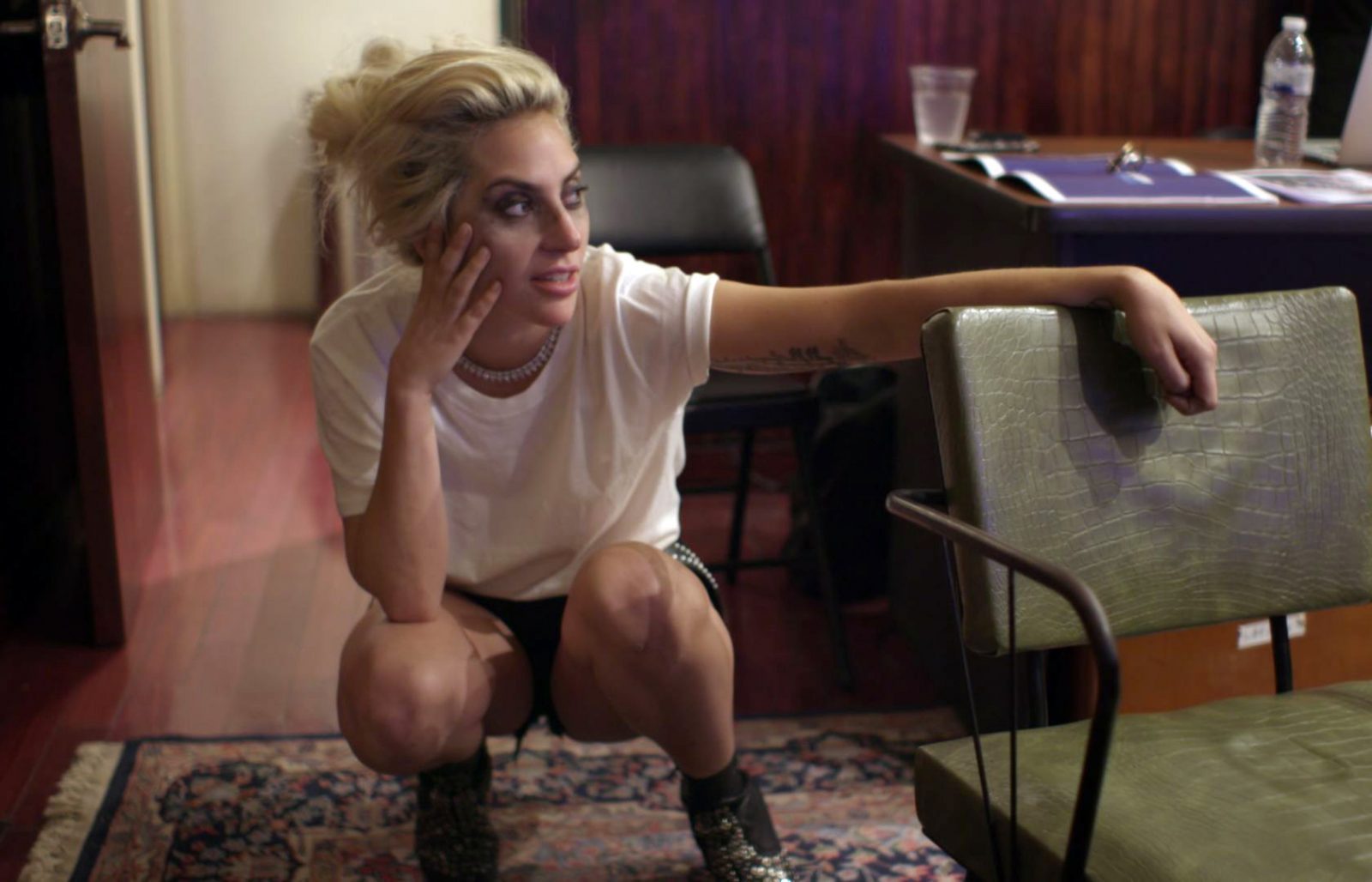 This documentary, which premiered at the Toronto Film Festival, is an intimate look inside the real life of Stefani Joanne Angelina Germanotta (stage name Lady Gaga). It shows her spending time with her family, preparing for her Super Bowl performance, recording her most personal album to date (Joanne), and struggling with chronic pain. If you’re a fan of Lady Gaga, you’ll surely find this fascinating. But even if you aren’t one of the hard-core Gaga fans that dub themselves “little monsters,” this documentary is still an interesting look into the realities of artistry and personal reinvention and the expectations that come with fame.

Earth is beautiful. At least parts of it are… for now. This documentary series follows journalist Bill Weir as he travels around the world to remote and beautiful places, telling stories of people, places and cultures that are at a crossroads, often between progress and growth and conversation and sustainability. 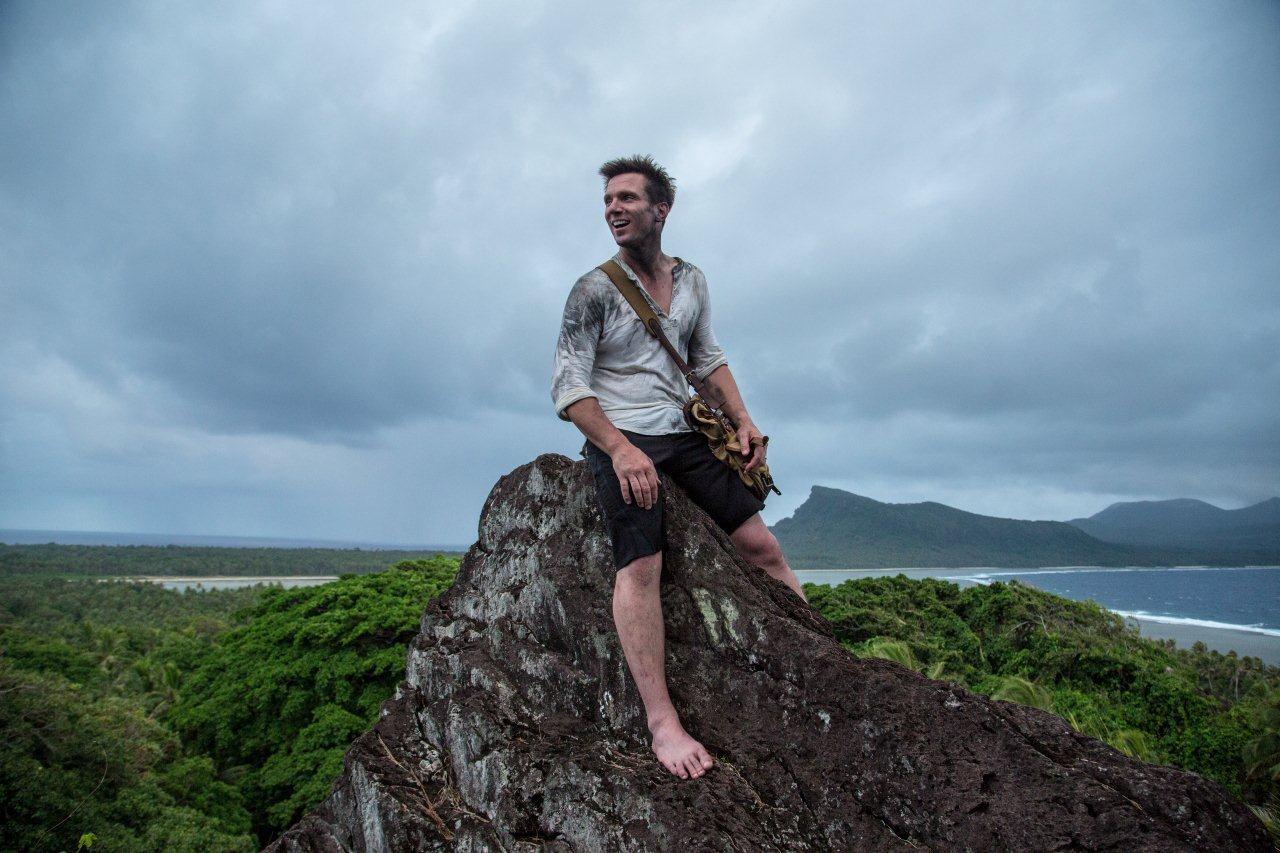 Season three just started airing and I watched the first episode “Patagonia: Paradise Bought,” and I was hooked. This episode highlights the story of Doug Tompkins and his wife Kris, and their journey of buying and conserving over 2 million acres of land in wild Patagonia. Their environmental crusade created some debate within the country – were the Tompkins preserving something natural and wonderful, or were they simply inhibiting necessary economic growth? What’s fascinating is that conservation can create economic growth; this episode shows the tourist economy in Patagonia that grew around the conversation of the land. For example, a local who previously poached animals now takes tourists on boat tours. The episode was very moving, and it’s a timely topic given that a recently leaked White House document recommended that many of our national monuments be reduced in size, potentially opening up hundreds of thousands of acres for mining, logging, and other development.

I might have cried eight times while watching this film. Or maybe it was nine. Damn, this was good!

It was nominated for an Oscar, so I had low expectations. Maybe that sounds like a crazy thing to say especially since I work in the film industry, but I’m generally underwhelmed by festival and award show favorites. And I’ve never been a bandwagon jumper, so I don’t really care what the critics say. This film, though, deserved all of those nominations (including an Oscar nomination for Best Picture and Best Adapted Screenplay). 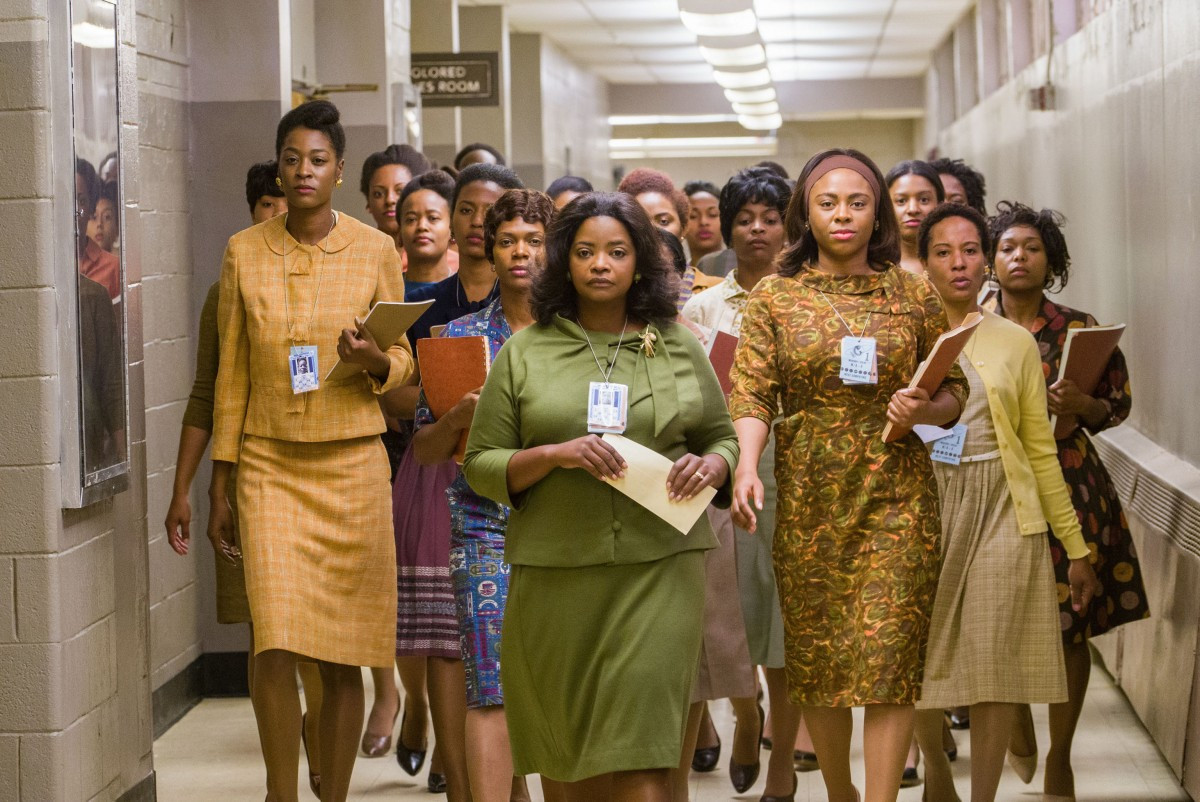 The film follows three brilliant African-American women who worked at NASA (portrayed by Taraji P. Henson, Octavia Spencer, and Janelle Monae). These women serve as the brains behind one of the greatest operations in history: the 1962 launch of American astronaut John Glenn into space during a time when the Space Race was being “lost” to the Soviets, and tensions and hopes were high. It’s an incredibly interesting story from a historical and scientific angle, and it’s also inspiring and moving in its depiction of the struggles surrounding civil rights and women’s equality. This movie won’t disappoint you!

When teenage Lydia Lee’s body is found in the local lake, her family is thrust into the grief and chaos surrounding the mystery of how she died. The story is set in 1970s small-town Ohio, and the Lee family is multi-racial (Chinese father and Caucasian mother). Lydia was the oldest of three, and she was the parents’ favorite: the one they put their hopes and dreams into. Now with Lydia gone and the unanswered question of how and why, the family begins to crumble.

This debut novel from Celeste Ng is a mesmerizing mystery, yes, but more so it’s a haunting character study about how our unrealized dreams and the desire to please the ones we love can damage us, especially when it means we aren’t being truthful to who we are and how we feel. It’s a story full of secrets and longing and anger and misunderstandings and love, and as the story alternates between past and present, we get to see each family member’s perspective. 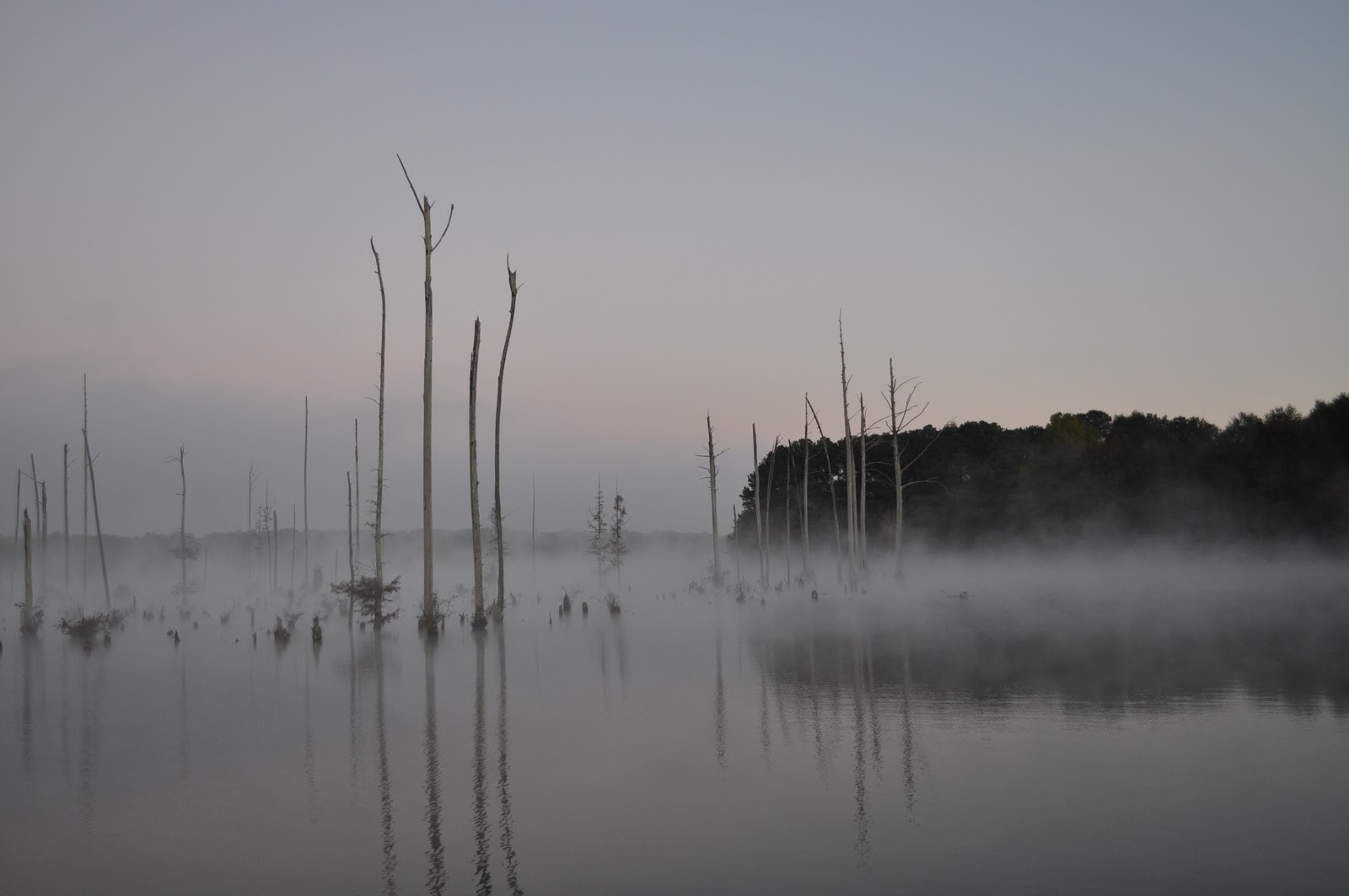 Ng’s writing style is beautiful and moving. She is one of the most talented writers I’ve read in a while in terms of her ability to create poetic sentences that never feel superfluous but paint a picture in your mind and create a feeling inside you.

Are you starting to get restless as you wait to find out if Adele will be releasing an album called 28 anytime soon? Be restless no further. Beth Ditto’s album Fake Sugar will tide you over as Adele decides what age her next album will represent.

Fake Sugar is the solo debut album of Ditto (she was previously with the indie rock band Gossip). This woman has some pipes, and the songs are clever, soulful, catchy, powerful, and all kinds of wonderful. It’s a neat and tidy album at only 11 tracks, yet it feels very expansive in sound (though still cohesive). The album is a retro-soul throwback with modern, pulsing drums and keyboards. The highlight of all of it is Ditto’s amazing vocal abilities.

For a sampling, check out these favorites of mine: The sing-along song “In and Out of Love,” the subtly powerful title track “Fake Sugar,” the building anthem “We Could Run,” and the harder-hitting “Go Baby Go.”

I am completely addicted to this Fake Sugar (and this kind of fake sugar doesn’t give lab rats cancer). 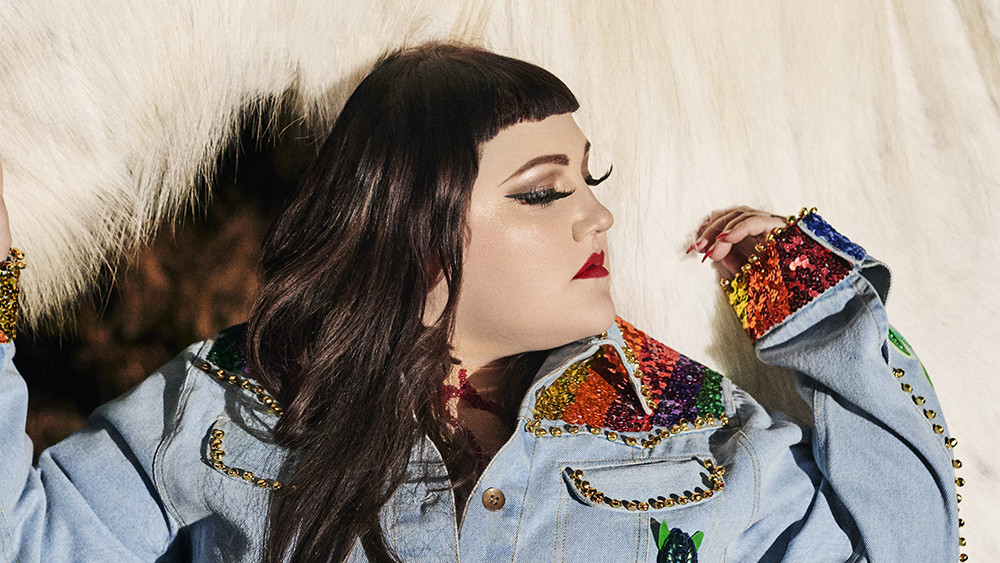 In 2014, Lights released the electropop album Little Machines. In 2016, she followed that up with an acoustic EP version of that album entitled Midnight Machines, which I absolutely loved. I don’t listen to a lot of electropop, but Lights is on my radar due to Midnight Machines.

Last month, she released her fourth studio album Skin & Earth, and there is a song on it that grabbed me from the first verse. “Kicks” is one of those uptempo, feel-good pop songs with a catchy sing-along chorus: “It’s how we get our kicks/Machete and the sticks/Lost in the thick of it with you/You’re looking for a fix/Now we’re just winging it/It doesn’t really matter what we do/’Cause not all who wander are looking for the exits.” 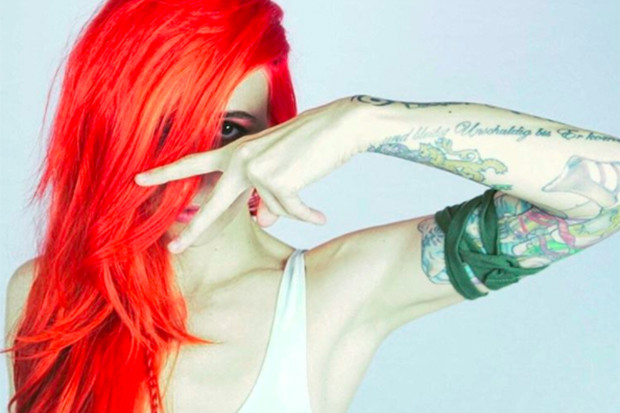 Just hold on a little while longer, and things wil

In two weeks, we must cut down the ash tree that i

My lips aren’t cold; YOUR lips are cold. ⁠⠀

On the chopping block… I really hope the rumor t

It’s coming for me! Swipe to see a video of fluf

Not to boast (too much)… but my deluxe CD of Eve

Thank you, @eric.colley.official and Mom, for expl

2021 kicks off tonight with the Cobra Kai season 3

In your darkest days, love will help you find the

This one is personal, and I’m going to share the

Did a photo shoot… Happy with the results… Non