The Thrill of Armchair High Altitude Mountaineering on Everest 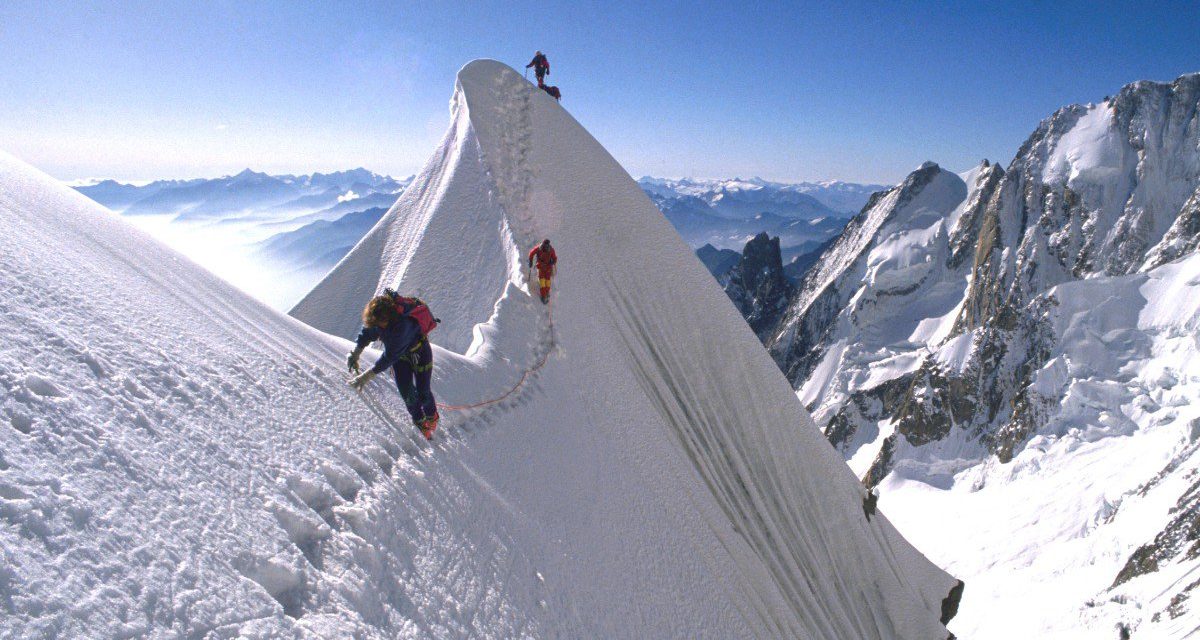 Three years ago, it was one o’clock in the morning, but I could not go to sleep because there was a traffic jam at the Hillary Step on Mt. Everest and I was afraid the climbers were all going to die.

Okay, I should clarify a few things. I am not a mountain climber and I have never been on Mt. Everest. I was watching Discovery Channel’s documentary TV-series Everest: Beyond the Limit from the comfort of my own couch and warm living room. But that’s a minor detail, really, because halfway across the globe, there was a traffic jam and at 28,839 feet above sea level, a delay like that could cause death. Too many people were trying  to use the fixed ropes to ascend the vertical rock face known as the Hillary Step and because of that, oxygen supplies were dwindling and cerebral edema (fluid in the brain) and pulmonary edema (fluid in the lungs) were surely setting in!

My husband assured me that if the climbers had died while filming this TV show, we probably would have heard about it. 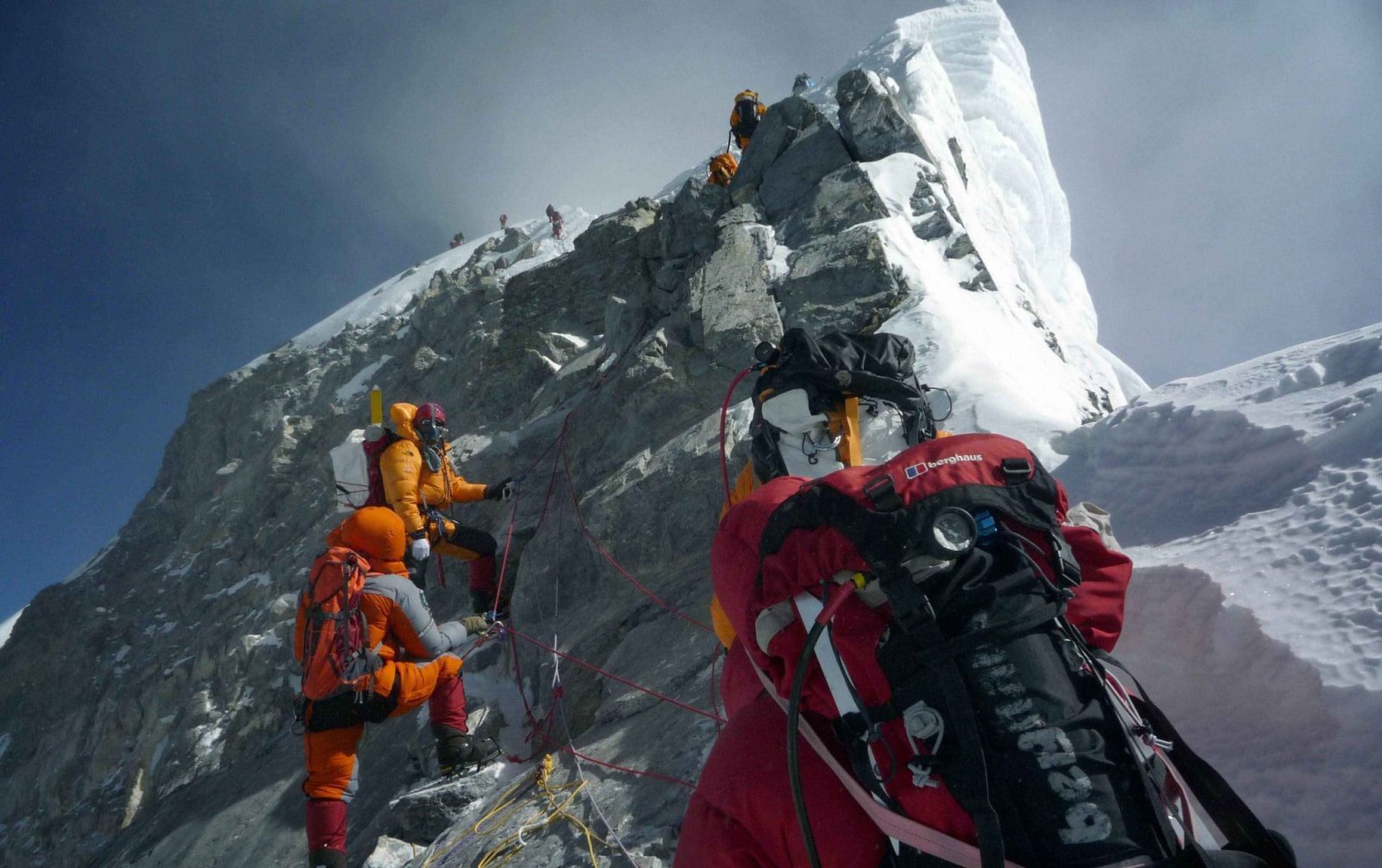 It is rare for me to get addicted to a show and binge-watch it. In fact, I’m not the best TV partner because I don’t like that many things when it comes to TV.  But on that fateful Saturday evening three years ago, I had been perusing the options on Netflix and I thought I’d try this show, if only so we could delete it from our queue.

Forty-eight hours later, we did delete the show from our queue but only because we’d watched the whole first season of six one-hour episodes.

Everest: Beyond the Limit started my obsession with high-altitude mountaineering, a topic that is fascinating to me for both its danger and beauty as well as for the medical and mechanical principles that go into getting a person safely up a mountain that he or she has no good reason to be on other than to defeat it, so to speak. 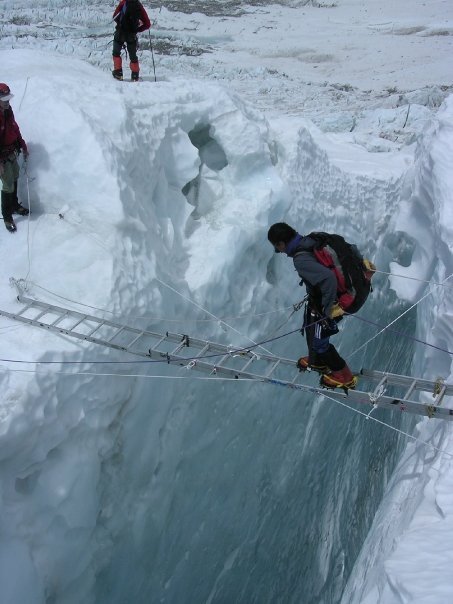 While I personally have no desire to climb mountains (Oh, I so hate being cold! And heights!), I do relate to the endurance aspect of it. I ran track and cross-country in college, and after college, I ran several half-marathons. I still jog, though not as obsessively as I once did, but what I really miss is the single-minded focus of racing and training for those races. While long-distance running and high-altitude mountaineering are mechanically different physical endeavors, there are some similarities between them. They involve training, preparation, endurance, and mental toughness. The things that you tell yourself inside the quiet space of your mind are just as important as any physical training you did leading up to the endeavor.  Those kinds of challenges have always been appealing to me.

So therefore, I am an armchair mountain adventurer, watching and reading about others climbing mountains from the safety of my home. And since it’s now officially climbing season on Mt. Everest, I’m going to highlight my favorite mountaineering books, movies, and TV shows below: 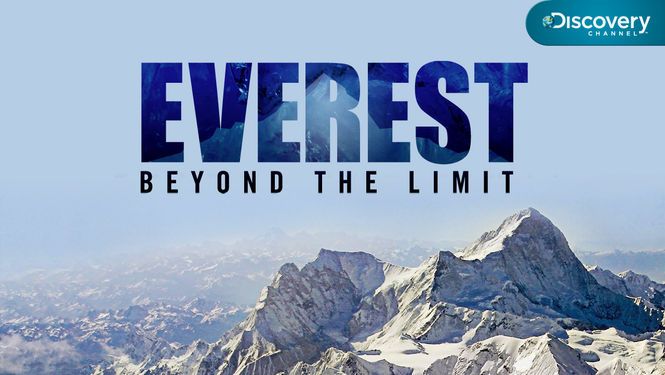 Everest: Beyond the Limit (2006, 2007, 2009 documentary TV series) – I already raved about this, but let me tell you a little more about what it’s actually about. This Discovery Channel series follows Russell Brice’s climbing expedition company as he leads clients through training and acclimation and an eventual summit attempt. You get one shot. The window of weather opportunity is small (think avalanches and white-out storms). And your body can only handle one true attempt. Climbers can easily lose 30 to 50 pounds during the three month expedition to and from the mountain (just doing the hike to get to base camp is a feat in and of itself).

This show is fascinating because it gives you details about the techniques and hazards of mountaineering, the havoc that it wreaks on the body, and the history of the mountain itself. On top of that, Russell Brice and his clients that are climbing Everest are quite the characters, from a double amputee to a tattooed Harley biker to a man with asthma. 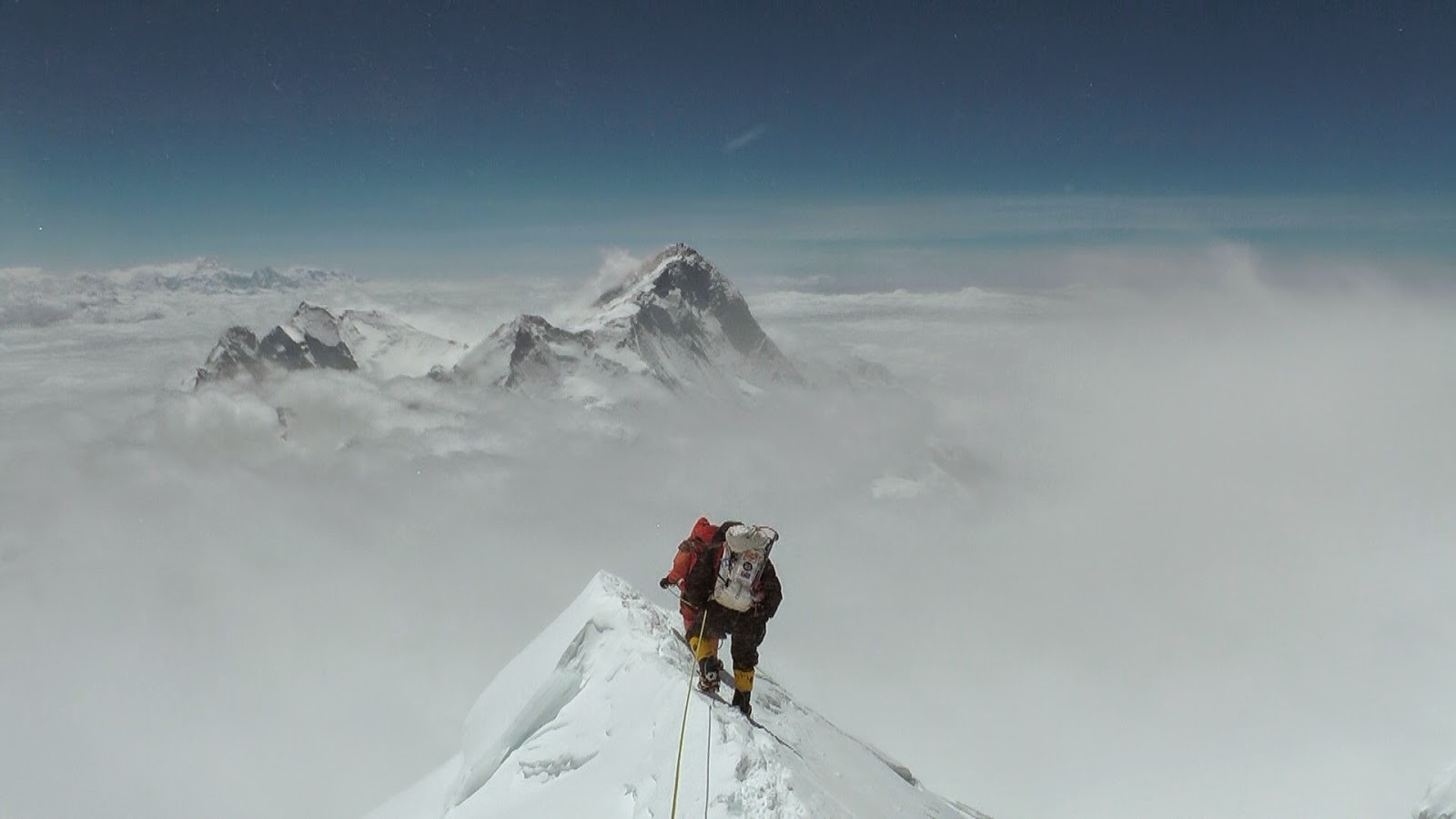 Dark Summit by Nick Heil (non-fiction book) – 2006 was considered one of the most controversial climbing seasons on Everest ever. A British climber died near the top of Everest and dozens of climbers passed by him without helping. By contrast, Part II of the book provides an account of climbers that abandoned their summit bid to help another dying climber. However, as this book highlights, it’s a complex matter. The mountain is so treacherous with some portions that involve vertical climbing with ropes and other portions that include precarious ladders over deep  crevasses. You simply cannot carry another person off of the mountain and doing so would almost surely get you killed. The climber saved in Part II was able to walk with assistance off of the mountain. He was not carried.

Still, it’s very interesting to consider the morality and implications of all this. Heil’s book sheds light on the commercialization and inherent selfishness that goes into a summit bid. With one chance to reach the top and tens of thousands of dollars into your training, base camp accommodations, travel, and equipment, the atmosphere of Everest is “every man for himself.”

As an interesting bonus, Everest: Beyond the Limit’s first season was during this 2006 climbing season, and there is footage in the TV series of Russell Brice’s climbers passing the British climber who eventually died. Thus, Brice and his team are highlighted in Heil’s book as well. I recommend that you watch the TV series first and then read this book. 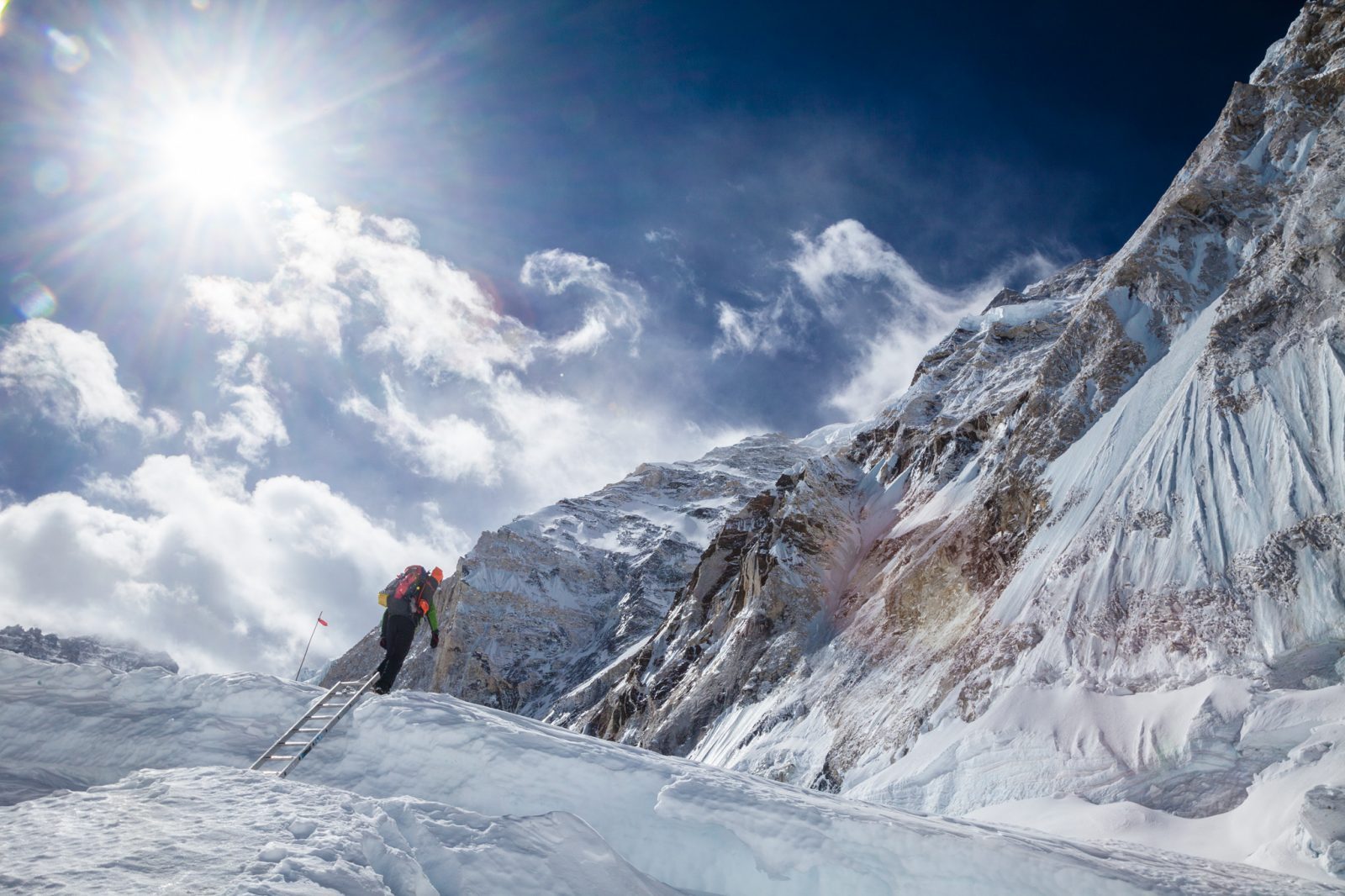 Touching the Void (2003 documentary film) – I love a great survival story and this one is truly amazing. In 1985, British climbing partners Joe Simpson and Simon Yates are scaling the Siula Grande in the Peruvian Andes when something disastrous happens on their descent: Joe breaks his leg. Through an ingenious rope technique, Simon and Joe work in tandem to lower Joe down the mountain. It looks as though they may actually survive when they are hit with a severe storm. Over one particularly steep ledge, Joe is left suspended in the air, out of Simon’s sight and hearing range. Believing his partner to be dead, Simon makes a decision that is still considered controversial and debated amongst climbers: Simon cuts the rope. 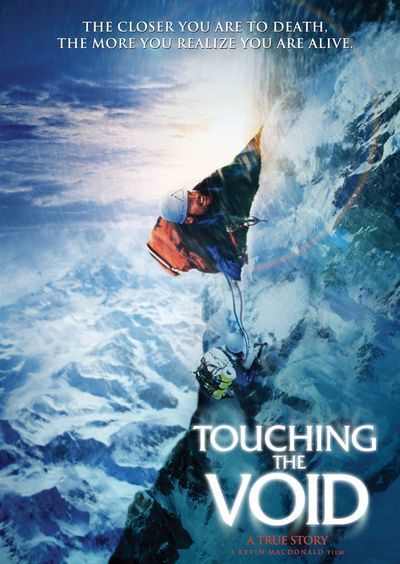 This documentary combines interview footage with the climbers and stunning, heart-stopping reenactments of the events leading up to the rope cutting and what happened to Joe after he fell (and fell some more). I won’t tell you everything, but let’s just say that it’s not yet over for Joe, and the story that unfolds is incredible.

Into Thin Air by Jon Krakauer (memoir) – This is a memoir by journalist Jon Krakauer about the May 1996 Mount Everest climbing disaster that left eight climbers dead. On that perilous day, delays to reach the summit and a sudden white-out storm caught several commercial climbing teams far from the relative safety of camp. Krakauer, himself, was lucky to survive. Recently, a movie (Everest) was released about the incident, but I didn’t feel that it even came close to capturing the allure, danger or even basic logistics of high altitude climbing. This book delves into the history of climbing, the moral and safety issues surrounding the commercialization of Everest, the fascinating physiological and psychological aspects of climbing, and the back stories and personalities of those involved in the tragedy.

The Climb by Anatoli Boukreev (memoir) – One of the guides involved in the Everest tragedy wrote his own version of events, partly in response to criticism that Krakauer dishes out in his own book. If the topic is very interesting to you, read both books for a fuller picture of the event. (Read Into Thin Air first, because Krakauer’s book came first and he is a very good writer. Boukreev’s book is primarily interesting on a content-level for those of us who want to know more info).

Frontline: Storm Over Everest (2008 documentary film) – Now that you’ve read Into Thin Air and The Climb, you must watch this fascinating documentary which has reenactments of the 1996 tragedy coupled with interviews with the survivors. It’s very well done, but to fully appreciate this documentary, you need to know a bit about mountaineering. So I recommend that you watch this only after you’ve read Into Thin Air by Jon Krakauer.

Blindsight (2006 documentary film) – Erik Weihenmayer was the first blind mountaineer to reach the top of Mount Everest in 2001. When he was contacted by Braille Without Borders, an institution for blind children in Tibet, he wanted to show the kids what it felt like to scale Everest.

Thus, an expedition is formed with a group of six blind Tibetan teenagers, with the goal to scale the 23,000 foot high Lahkpa Ri peak that’s right beside Everest. This documentary gives great detail about the training and preparation for the kids, and it demonstrates that even with physical limitations, drive and determination can take you far in life.

You might be wondering why I did not include the recent movie Everest starring Jake Gyllenhaal and Jason Clarke in this list. Well unfortunately, as I mentioned, I just didn’t think it was well done. I found it somewhat interesting because I think mountaineering is interesting, but the movie failed to capture the appeal and the danger of mountaineering, and it left out so many important details as to what caused things to go wrong in the 1996 tragedy. 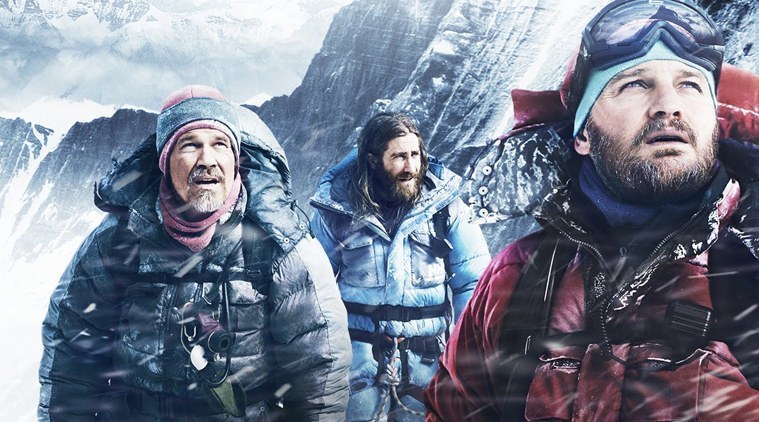 It also failed to orient the viewer to the specific route up the mountain, which meant when the white-out storm hit the climbers in the film, it’s unclear who is where and what is really going on. Additionally, the portrayal of Scott Fischer (played by Jake Gyllenhaal) felt like a buffoonish drunken character more than that of a man who was a very accomplished climber but made mistakes in the days leading up to the incident. I could go on and on, though I won’t, since the point of this blog is celebrate the stuff I like. But since this is the most well-known Everest movie with its recent theatrical release, I think it’s worth giving my two cents. In essence, the film lacked suspense and heart and important details.

So if you watched the movie Everest and were unimpressed, give one of the seven books or movies above a try and see if you feel differently.

Now I must go because I have mountains to climb… in my head.