Lusciously Romantic and Not So Sweet Picks 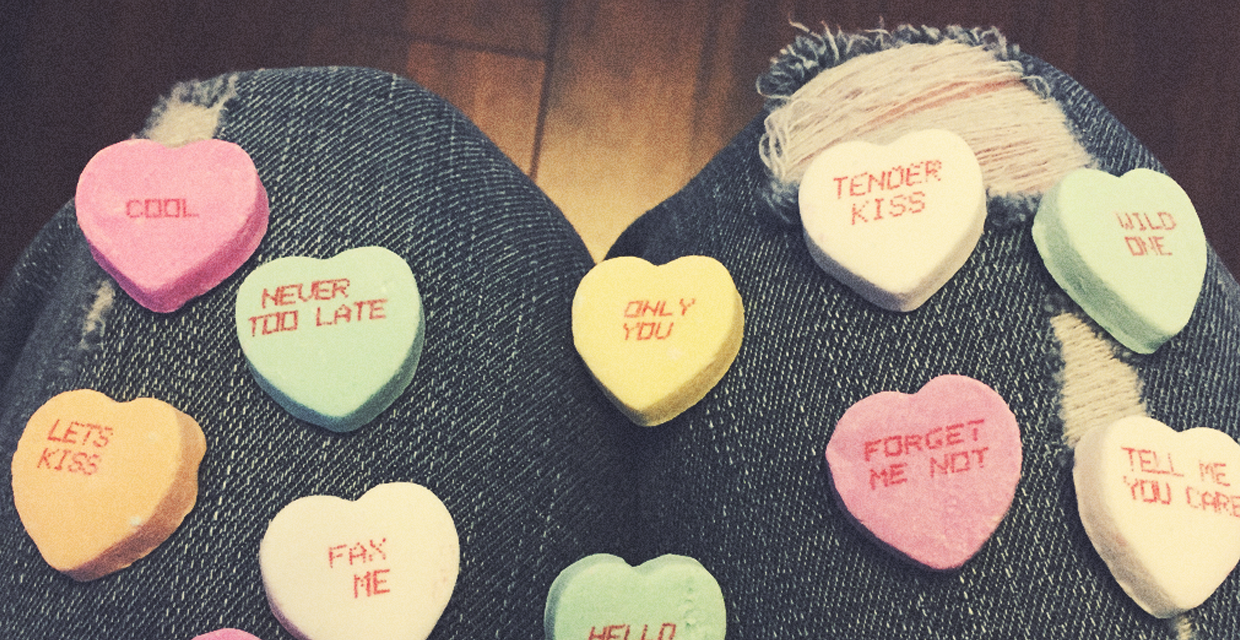 Valentines Day is just around the corner, and maybe you’re in love or in lust or maybe you’re heartbroken or none of the above. Regardless, I’ve got your back this February 14th.

Below I list out some of my favorite romantic movies, books, and songs for those hopeless romantics. However, if you’re feeling a little jaded or if you just generally believe that Valentines Day is a commercial holiday invented by flower shops and chocolate factories to make some fast cash (because well, it kind of is), fear not. I’ve listed some darker picks for you too. 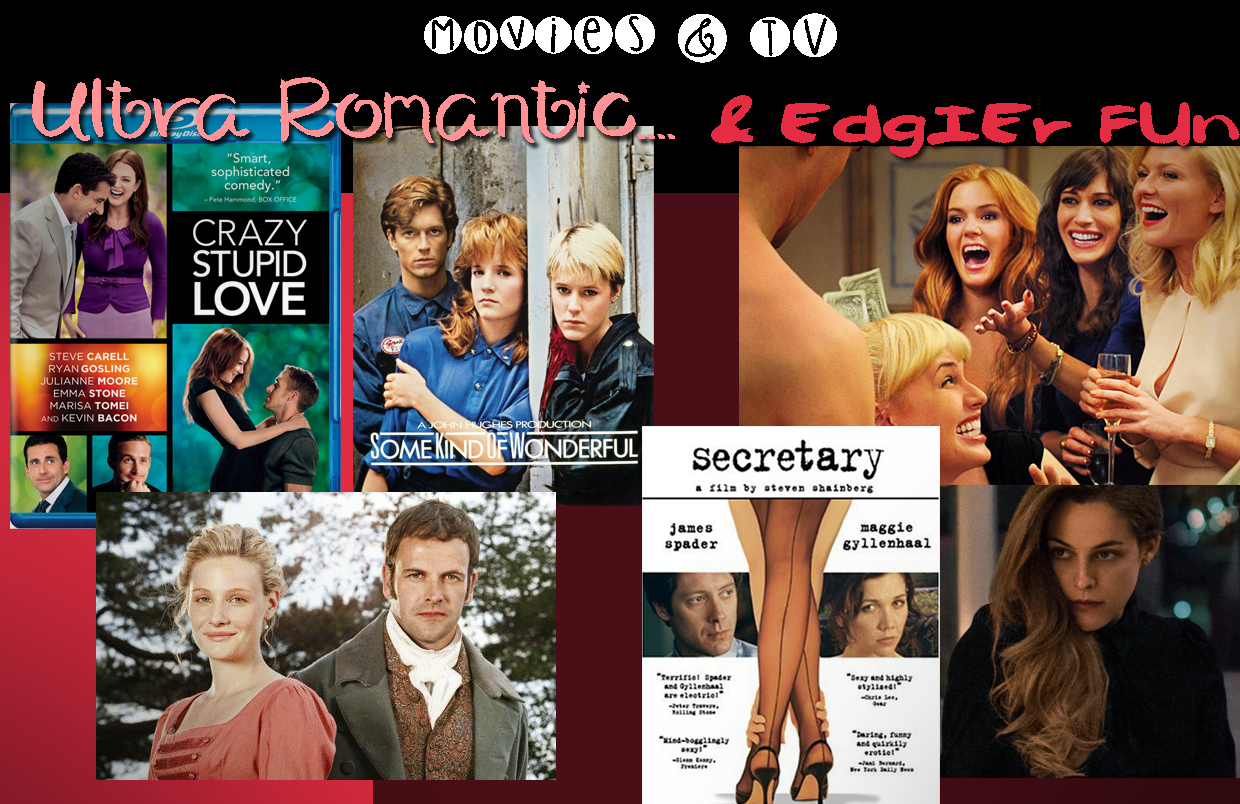 Superior to the 1996 movie version (sorry, Gwyneth), this mini-series of 4 one-hour episodes is full of charm and wit and sparkling performances from its two lead actors.

This is a sweet and funny dramedy about a man (Carrell) who enlists the help of a smooth-talking ladies man (Gosling) in order to win back his estranged wife (Moore). There are two romances in this, one between Carrell and Moore and one between Gosling and Stone.

Why not turn on an 80s romance with stereotypical clichés like the popular girl, the tomboy, the meathead, and the likeable everyday guy? If you’re in the mood for an 80s teen romance, you can’t go wrong with John Hughes (he wrote and produced this one).

This movie has been accused of being mean and misogynistic. I will admit that it is mean… but it’s also kind of funny. It’s certainly not PC, so be aware of that and don’t take it too seriously. It’s a much darker version of Bridesmaids, and Kirsten Dunst’s jealous, uptight performance is fabulous.

Follow a law student as she becomes a high-priced escort. It’s weird and wonderful and provocative.

Well, I almost put this on the romantic list, because it is in fact a love story, though an atypical one. After being released from a mental hospital, a young woman gets a job as a secretary to a demanding lawyer, where their employer-employee relationship turns into a sexual, sadomasochistic one. Maggie’s character truly likes it and she finds it psychologically healing. 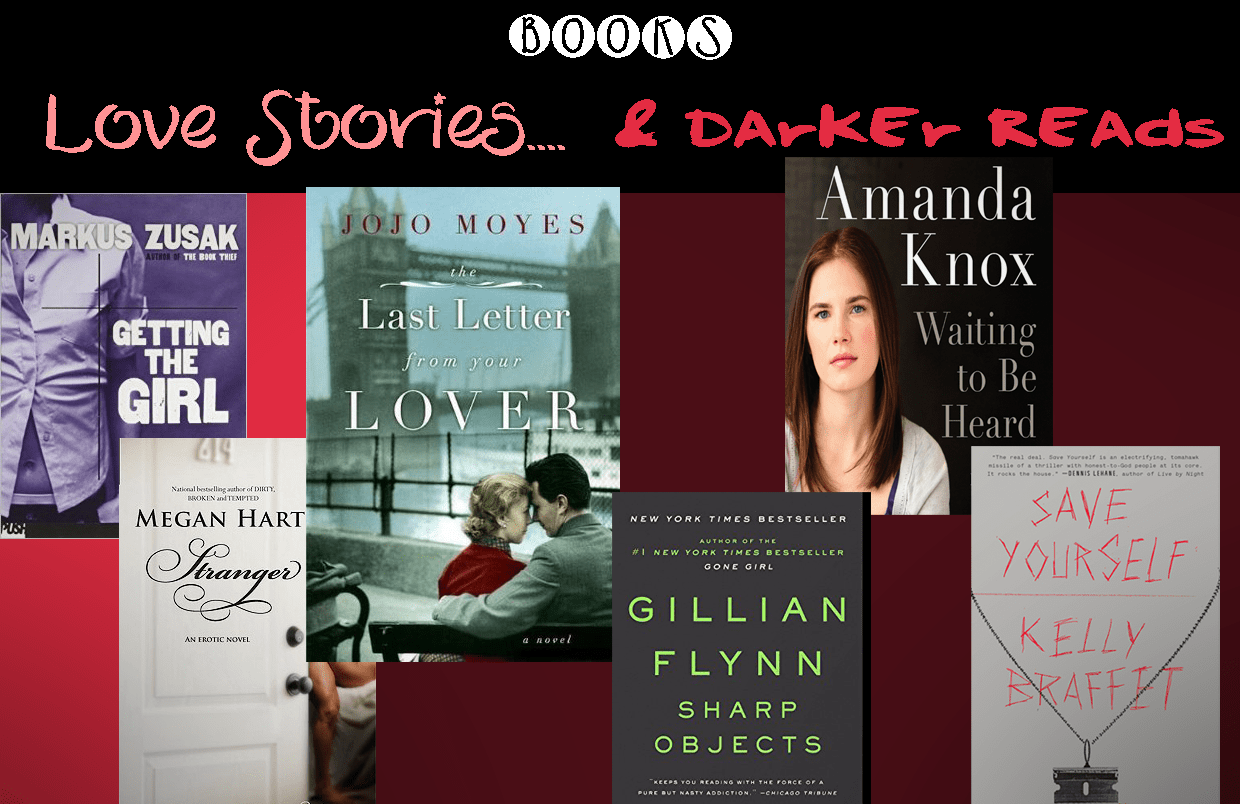 In 1960, Jennifer wakes in the hospital with a serious case of amnesia. Searching for clues, she finds an impassioned letter, signed simply “B,” from a man for whom she seemed willing to risk everything. In 2003, a young journalist stumbles upon the letter and becomes obsessed with learning the unknown lovers’ fate—hoping it will inspire her own happy ending. It’s a memorable double love story that cuts between past and present.

Cameron is a teenage boy who lives in the shadows of his more accomplished, more confident older brothers. He has low self-esteem yet he possesses a secret talent for writing. The chapters are interspersed with Cameron’s poetic journal entries. In no way is this book sappy or melodramatic – it involves guys fist-fighting, playing sports, and going after girls, but it is very raw and real and it reached in and grabbed my emotions by the throat and didn’t let go. I cried at least half a dozen times in the second half of this book. Important note: This is the same author that wrote the award-winning bestseller The Book Thief. This reads differently than The Book Thief but it’s lovely in its own right.

If you want to read some explicit sex that is also smart and thought-provoking and isn’t complete garbage writing that’s full of “Holy Cow!” every page (so I’ve heard, Fifty Shades of Grey), try this book. Grace is the director for a funeral home and she struggles with personal intimacy. Because of that, she pays for sex with strangers… really hot strangers.

Valentine Picks for those feeling unromantic:

Patrick’s father killed a boy while driving drunk and now Patrick is a town pariah who works at a dingy convenience store. When a goth teenager enters his life and starts propositioning him for sex, things begin to get a little complicated… and dangerous. This is a slow-burning character piece with lots of moral gray area.

The darkest of the Gillian Flynn books in my opinion. Fresh from a brief stay at a psych hospital, reporter Camille returns to her tiny hometown to cover the murders of two preteen girls. She must stay in her childhood home – a Victorian mansion – with her neurotic, hypochondriac mother and her thirteen-year-old half-sister who makes Regina George in Mean Girls seem like she deserves the Miss Congeniality Award. The deeper Camille digs into the murders, the more she finds herself identifying with the victims and uncovering her own demons.

No matter how bad your Valentines Day is this year, it’s better than being painted a psychopathic temptress in the press and being thrown into an Italian prison because some career criminal broke into your flat while you were gone, murdered your roommate, and left his DNA all over the place… and then somehow you got blamed for it. Remind me not to study abroad in Perugia. 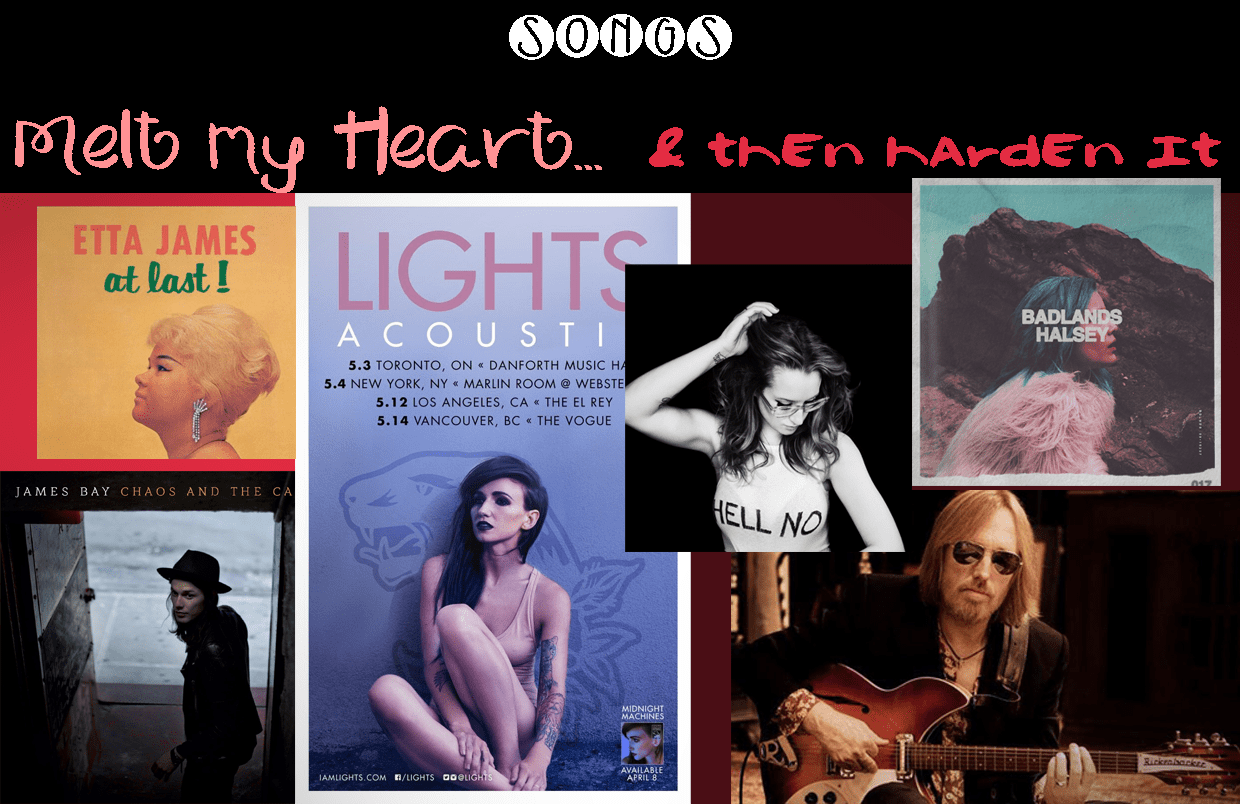 He is soulful, he is talented, his voice is melodic with just enough rasp, and his lyrics are poetry. My favorite tracks are Hold Back the River, Need the Sun the Break, Incomplete, Scars, and Craving.

At Last was originally written in 1942, but soul singer Etta James’ version was released in 1960. Her voice is honey and the arrangement is dreamy and magical. It is one of the most romantic songs, like, ever.

In 2014, singer-songwriter Lights released an album called Little Machines. It’s good if you like electro-pop, but it’s not my personal favorite. However, in 2016 she released a stripped down version of the album called Midnight Machines. It brings the focus more squarely on her beautiful lyrics and voice. My favorite songs are Same Sea, Muscle Memory, Running with the Boys, and Up We Go.

Valentine Picks for those feeling less angst or anger:

“You’re not the Cash, and I’m not the June.” That’s right, Ingrid. You tell him! This post break-up song is a full-on anthem. It’s one of the most fun F.U. songs I’ve ever heard.

This is not one of Tom Petty’s most popular songs, but it’s one of my favorites. The yearning of those drum beats and guitar strings punctuated with the periodic “Hey!” gets me every time.

I’m IN LOVE with this girl. My favorite song of hers is Trouble, and with lyrics like the following, how can I resist it? “Would you lie for me? Cross your sorry heart and hope to die for me? Would you pin me to a wall, would you beg or would you crawl, stick a needle in your hungry eyes for me?” That song doesn’t appear on her Badlands album, but Badlands is full of great songs, including my favorites Young God, Colors, Castle, Haunting, and Roman Holiday.

No matter if you’re feeling romantic or cynical or somewhere in between this year, I wish you a happy Valentines Day. Xoxoxo