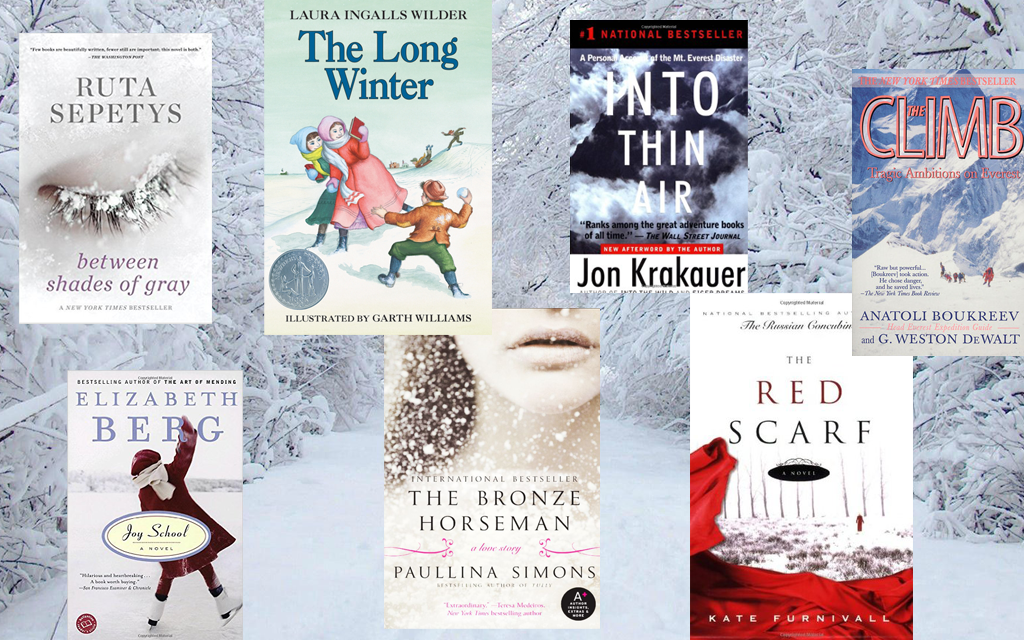 Baby, it’s cold outside! It’s winter time, which means I love to read books that take place in snowy, cold (sometimes dismal) settings. You can really feel the atmosphere of these cold settings while staying warm inside.

The following are some books I’ve enjoyed that are the iciest of icy:

Between Shades of Gray by Ruta Sepetys – In Lithuania in 1939, the Soviet secret police ship 16-year-old Lina, her mother, and her brother to a labor camp in Siberia. In case you didn’t know, Siberia is REALLY F*CKING COLD. This book is written with simple but beautifully effective prose. The story is incredibly tragic at times, but it also has its hopeful moments showcasing the best of humanity. A well-written survival story grounded in history.

The Bronze Horseman by Paullina Simons – This book feels like a hybrid genre to me. It’s a very thick historical fiction book (my copy is 810 pages), but it’s also a sweeping romantic saga. The first half is dark and was especially fascinating to me, because it is set during the World War II siege of St. Petersburg (then known as Leningrad). Throughout an unbearably cold winter, the Germans cut off the city from food, supplies, electricity… everything the Russian people need to keep from freezing and starving. The story follows a 17-year-old Russian girl named Tatiana, a 20-year-old soldier named Alexander, and Tatiana’s older sister (yep, love triangle).

Joy School by Elizabeth Berg – I love the unique voice that Elizabeth Berg uses in this book for her young protagonist Katie. Set in the 1950s during a Missouri winter, this is a coming of age story about first love, loneliness, friendship, and hope. It’s a fast, sweet read with moments to make you laugh out loud and moments to really tug at your heart.

Into Thin Air by Jon Krakauer – This is a memoir by journalist Jon Krakauer about the May 1996 Mount Everest climbing disaster that left eight climbers dead. On that perilous day, delays to reach the summit and a sudden white-out storm caught several commercial climbing teams far from the relative safety of camp. Krakauer, himself, was lucky to survive. Recently, a movie (Everest) was released about the incident, but I didn’t feel that it even came close to capturing the allure, danger or even basic logistics of high altitude climbing. This book delves into the history of climbing, the moral and safety issues surrounding the commercialization of Everest, the fascinating physiological and psychological aspects of climbing, and the back stories and personalities of those involved in the tragedy.

The Climb by Anatoli Boukreev – One of the guides involved in the Everest tragedy wrote his own version of events, partly in response to criticism that Krakauer dishes out in his own book. If the topic is very interesting to you, read both books for a fuller picture of the event. (Read Into Thin Air first, because Krakauer’s book came first and he is a very good writer. Boukreev’s book is primarily interesting on a content-level for those of us who want to know more info).

The Long Winter by Laura Ingalls Wilder – Yes, this is a children’s book and yes, it’s part of the Little House on the Prairie series, but it’s the one book in the series that I feel really stands up to adult reading. In October 1880, an early blizzard hits the Dakota territory and it never lets up for seven months. The town depends on the trains to bring food and supplies, but the snow is so severe that winter that the trains can’t get through. Every morning, Laura and her family awake to frost on top of their blankets. Um, burrrr. When they eventually run out of wood to burn, they twist hay all day just to keep the fire going. It’s a true survival story.

The Red Scarf by Kate Furnivall – Here’s one more Russian story to throw into the mix. In 1933, a young woman named Sofia escapes a labor camp in (yes, you guessed it) Siberia, leaving behind her friend Anna. Sofia goes in search of Anna’s true love with the ultimate goal to go back and rescue her. It has a touch of magic and romance in it, and as a result, this book doesn’t feel as dark as the reality must have been. But yeah, it’s still really snowy and really cold.