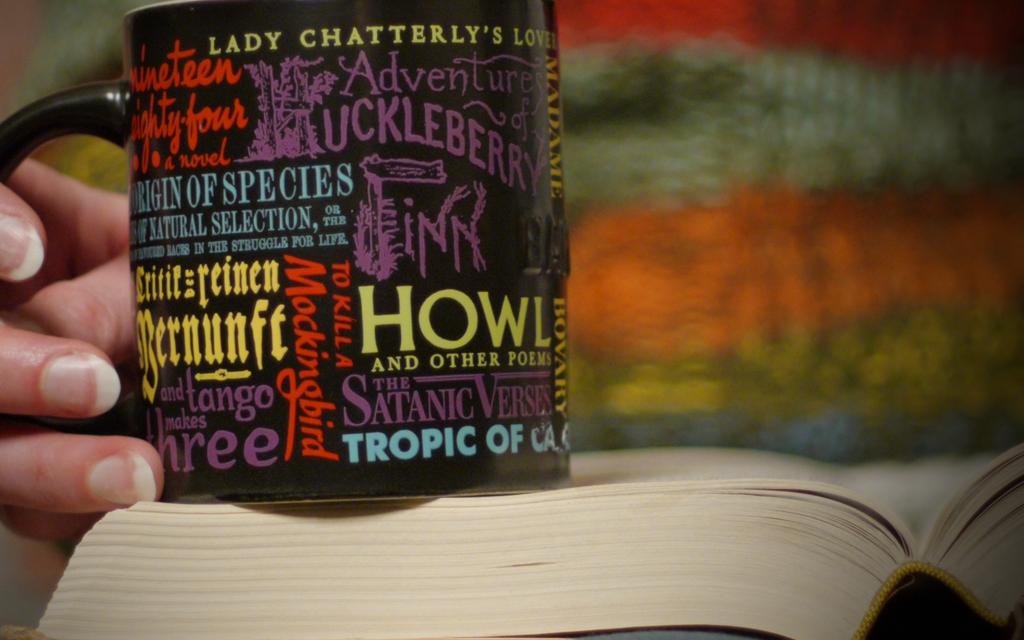 The stories we tell matter. They always have, and we’re living in a moment right now where that couldn’t be more true. How do we treat each other? What do we teach our children? The ways in which we interpret and internalize the things we read, watch, and absorb has an influence on how we view the world and treat each other. I don’t want to live in a country where young children believe that it’s okay to make fun of someone for having a disability or that it’s okay to rank women on a scale of 1 to 10. Those things are not okay.

That said, I feel hopeful about the future, because I think that young people have a great capacity to form their own world views based on a myriad of experiences and influences, including the books they read, the movies they watch, the music they listen to, and the other art forms they experience.

The stories we tell matter.

My favorite coffee mug is my “banned books” mug. (Well, my Goofy mug from Disneyland is also a top contender, but that’s a different story). I am a little obsessed with banned books. I love to read them, but even more so, I love to read about them. Why was that particular book banned? What is the story behind the call for censorship?

I am anti-censorship in so many ways that extend beyond banned books. Don’t get me started on the 2014 “Ban Bossy” campaign, in which Sheryl Sandberg  (CEO of Facebook), Jennifer Garner, Beyonce, and other celebrities urged people to pledge to no longer use the word “bossy”… Okay, get me started because a short rant might be fun: Um, telling someone that they aren’t allowed to use a basic word (a relevant, useful word) is seriously… well… bossy. Ah, the irony. And see, that was a good use of the word “bossy,” wasn’t it? I am all for empowering young girls. I was a headstrong one myself with parents who encouraged leadership in me. But I don’t believe that you’ll ever empower young girls by teaching them to be overly sensitive to a simple word. Empower young girls through action and example and opportunities, not through censorship. Boom, end of rant.

But now, the landscape in which we live is getting trickier and trickier. We’ve witnessed supposed “role models” regularly using words as weapons to bully others, and I believe that type of behavior – when not put in check – is often replicated by others until it becomes seen as almost “normal.” And that’s scary. So it’s perfectly valid to feel or say, “Hey, it’s not okay to say that!” It’s understandable to push back against things that feel wrong. Right now is an opportunity though. As the political and social climate of this country feels ever increasingly combative and contentious, artists have the ability to make people think and to lift people up with their creations, to combat this trend of tearing others down.

I gravitate toward things that inspire me, that move me, that make me feel good. I love OneRepublic’s uplifting music, and I swear I cry every time Sean Astin makes that single, measly tackle in Rudy. Storytelling can help us navigate our own life and our own problems. If you feel trapped in your life in any regard, I would suggest that you watch one of my favorite movies, The Shawshank Redemption. That movie is loaded with powerful metaphors: You can tunnel your way out of your oppressed state of being with perseverance and determination (or a tiny rock hammer).

But you know what else I like? Really dark stuff. If a decent number of reviewers on Amazon say that the book is inappropriate or offensive, there’s a good likelihood that I’ll like it. Five years ago, I read Gillian Flynn’s Sharp Objects, and I thought, “Oh my God, where have you been all my life, Gillian?!” (It turns out she’d been a writer for the magazine Entertainment Weekly, so I’d unknowingly been reading her words for years already). I proceeded to devour her other two books, one of which I’m sure you’ve heard of (Gone Girl)… and then I proceeded to read articles and blogs and message board posts accusing her of being misogynistic. Wha-at?! She has been accused of this so much that her Wikipedia page even highlights it. Yes, I will agree that Gillian writes many unlikeable female characters. But she writes flawed characters for both genders. Her books are dark across the board. Most of the characters – regardless of gender, ethnicity, or age – are not people you want to emulate your behavior after. (Though I did very much like the protagonist of Sharp Objects. She has some mental health issues – she engages in serious self-harm, for one – but she’s smart in many ways, determined in many ways, and she’s a survivor).  And so when I read someone accuse Gillian Flynn of being misogynistic, I can’t help but wonder if maybe there’s something almost subtly misogynistic about accusing a female writer of being misogynistic just because she dares to write dark or unlikeable female characters. Just sayin’.

So when I say that the stories we tell matter, it doesn’t mean that I feel we should only consume the most wholesome of stories. Not at all. If it makes you think or it makes you feel (or better yet, both!), it’s doing something. Embrace it or push back against, but think and feel. So in this blog, I want to celebrate things from across the spectrum – thematically and tonally – that move me. Happy and sad. Light and dark. Funny and serious. Uplifting and disturbing. All of it.

I’m not here to be a critic. If I read or watch something that I think isn’t any good, I’m not going to write about it in my blog. My opinion of something is completely subjective, based on my own perspectives and tastes. I hate it when I hear someone discount a movie or a book without even seeing it: “Well, Rolling Stone gave it a bad review.” Um, okay, but is Rolling Stone a synonym for your mind? Because that Rolling Stone review is just one person’s opinion.

The other reason I’m focusing on celebrating the art I love versus critically reviewing things I didn’t like is because creating art is really difficult. It can be difficult emotionally if the creator is pouring something of his or herself into it. Or it can be difficult logistically or financially – to create it in the first place and/or to get it out in the world where people can see it. I can say from experience that Writing Is Hard. But you want to know what’s really easy? Leaving a scathing one-star review on Amazon – that’s easy. And I can say from experience that Filmmaking is Hard. Spending over a year raising the financing, writing a script, producing a film on a small budget, and editing the entire thing is really hard. But you know what’s really easy? Watching only ten minutes of said movie and then writing a review that starts with “This is the worst movie I’ve ever seen.” (Really, the worst? Ever?)

So let’s celebrate the things that move us artistically – books, movies, music, theatre, dance, painting, sculptures, fashion, and everything else that makes us feel.

Because the stories we tell… they really, truly matter.